Phil Mickelson, fresh off his second consecutive victory on the senior circuit, is brimming with confidence... 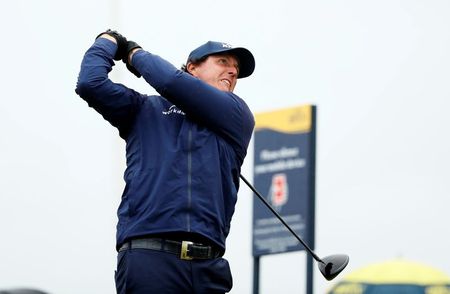 (Reuters) – Phil Mickelson, fresh off his second consecutive victory on the senior circuit, is brimming with confidence as he transitions back to the PGA Tour this week to face “the young guys” at the Zozo Championship in Thousand Oaks, California.

Mickelson, 50, won his second PGA Tour Champions event on Sunday after winning his debut in August and is eager to compete among a loaded field at Sherwood Country Club where first-round action begins on Thursday.

“I’m excited to compete and come off of last week’s event on the Champions Tour and try to play, compete against the young guys,” Mickelson said on Wednesday. “This is a fun opportunity for me.”

Mickelson won the most recent of his 44 PGA Tour victories in February 2019 but is hoping his early success on the over-50 circuit will carry over to the regular tour.

“It’s been fun for me to play over there. I seem to get a little bit of confidence and I’m hoping to bring that over into this event as well,” said Mickelson.

For Mickelson, his Zozo Championship debut this week is all part of his preparation for the Masters, which because of the COVID-19 pandemic, will be played this year from Nov. 12-15 as opposed to its usual spot in early April.

Mickelson said cooler temperatures for the Masters will make the Augusta National layout play longer than usual and favour some of the game’s big-hitters.

But Mickelson, a three-times Masters champion, has improved his putting since the year began and feels that could give him an edge on Augusta National’s fast, undulating greens.

“I putted poorly starting the year and it’s really come around,” said Mickelson. “I’m excited to get to that golf course putting the way I am, I think I can get in contention.”

(Reporting by Frank Pingue in Toronto, editing by Pritha Sarkar)