Even as it prepared for its season opener, Washington had an eye on its Week 2 matchup at Michigan.

In hindsight, that was a mistake.

The then-No.20 Huskies suffered what has been labeled perhaps the worst loss in program history, a 13-7 defeat to visiting Montana, a Football Championship Subdivision school.

“We know we did not give a performance that was Husky football, and we apologize for that, and we’re going back to work to correct that,” UW coach Jimmy Lake said.

Missing his top three wide receivers because of injuries, quarterback Dylan Morris was 27 of 46 for 226 yards with three interceptions.

Linebacker Edefuan Ulofoshio vowed the Huskies would bounce back.

“That’s our only choice right? Can’t say ‘we lost to Montana, season’s over right?'” he said. “Gotta get back on your feet and keep moving. We’ve got 11 other games guaranteed and we’re going to try and win all of them.”

That won’t be easy at the Big House.

The Wolverines opened with a 47-14 victory against Western Michigan, though they lost star wide receiver and kick returner Ronnie Bell to a season-ending knee injury. 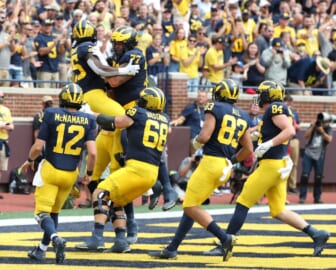 The Wolverines’ Cade McNamara completed 9 of 11 passes for 136 yards and two touchdowns and Blake Corum rushed for 111 yards and a score.

One of the players who might’ve replaced Bell, Giles Jackson, transferred to Washington in the offseason.

“I don’t think it’s relevant. You always think the first game is the second-hardest to prepare for, but the second game is even harder. Because both teams will go back and work on – they know where they’re at, they go back and work on the things that they need to improve and they will. It’s a race to make those improvements in one week. Got a good idea that Washington has been preparing for us for a long time. It’s an important game for both teams so I think that makes that first game irrelevant. As it most always is, but as they say, especially in this second-game scenario.”