Michigan State vs. No. 2 Gonzaga at San Diego 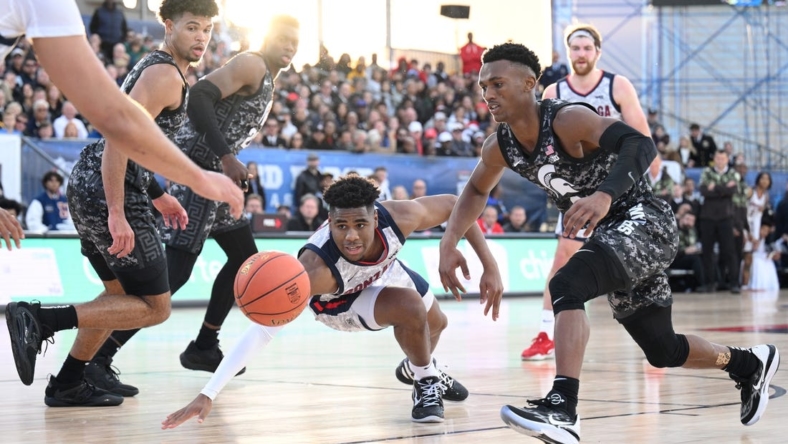 Drew Timme recorded 22 points and 13 rebounds and No. 2 Gonzaga squeaked out a 64-63 victory over Michigan State on Friday night in the Armed Forces Classic on the flight deck of the USS Abraham Lincoln in San Diego.

Timme split two free throws with 1:51 left to give the Bulldogs the one-point lead. The Spartans had a chance to win it but Jaden Akins’ 3-pointer bounced off the back of the rim as time expired.

Mady Sissoko had 14 points and nine rebounds before fouling out for Michigan State (1-1). A.J. Hoggard had 12 points and three steals, Tyson Walker also scored 12 points and Malik Hall added 11 points and seven rebounds for the Spartans.

The first half was played in sunlight in breezy conditions under lights shining on the compact setting. The second half began during sunset and it was fully dark midway through it.

The Bulldogs committed 18 turnovers and the Spartans had 16.

Michigan State led by seven at the break and quickly elevated the advantage to 45-33 on two free throws by Joey Hauser with 17:05 left.

Gonzaga rattled off the next 11 points with Efton Reid scoring on a putback to cut the deficit to one with 12:43 remaining.

The Spartans missed their first seven first-goal attempts of the second half before Walker converted a layup to give Michigan State a 47-44 edge with 12:03 left.

Hoggard made three of four free throws over a 31-second span to boost the Spartans’ lead to six.

The Bulldogs answered by scoring eight of the next 11 points with Timme concluding it with two baskets to cut Michigan State’s lead to 53-52 with 6:18 to play.

Timme’s three-point play knotted the score at 55 with 5:13 remaining.

Tre Hollomon scored a buzzer-beating layup to give the Spartans a 38-31 halftime lead.

Sissoko scored 10 in the half for Michigan State and Strawther had nine for Gonzaga.