Michigan State rallies to oust No. 4 Kentucky in double OT 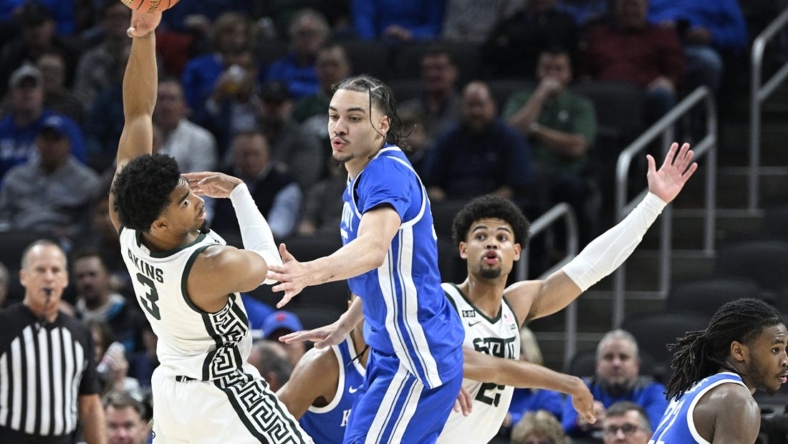 Mady Sissoko scored five straight points in the second overtime to help Michigan State pull out an 86-77 victory against No. 4 Kentucky on Tuesday night in Indianapolis.

Oscar Tshiebwe’s impact appeared right on time for Kentucky, as he made his season debut by scoring 22 points and grabbing 18 rebounds before fouling out. Time and time again, the Wildcats leaned on their All-American to carry the load.

In the first overtime, Kentucky built a 67-62 lead only to have Michigan State pull even in a 63-second span. Similar to how regulation ended, Hall’s dunk forced a second overtime.

Tshiebwe, a senior forward who missed the first two games following a procedure on his knee, received a huge ovation when he checked into the game on the way to an 11-point first half.

The Wildcats used a 12-3 stretch early in the second half to take a lead. But two Sissoko free throws at the 7:35 mark put Michigan State back on top.

Tshiebwe made notable plays throughout the game. He gave the Wildcats the lead again with a dunk before blocking at shot at the other end before teammate CJ Fredrick’s 3-pointer for a 56-52 edge that resulted in a Michigan State timeout.

The Spartans were even at 58-58 on Hauser’s 3-pointer. But after Toppin’s free throw for Kentucky, Tshiebwe converted off an offensive rebound.

Hauser answered with a jumper and then the Spartans got the ball back after Tshiebwe missed a jumper. Sissoko’s offensive rebound was negated by a held ball, with the possession arrow in Kentucky’s favor.

Wallace made the second attempt on a two-shot foul before Hall’s dunk tied it with three seconds left in regulation.

Kentucky led 20-13 before Michigan State’s 8-0 run in a closely contested first half. The Spartans led 36-34 at the break on Hall’s 3-pointer.

That was the fifth 3-pointer of the half for the Spartans. Kentucky was 2-for-10 from long range before halftime.

The game was part of the Champions Classic.

This was the first Kentucky-Michigan State meeting since the 2019 Champions Classic, when Kentucky won in New York.