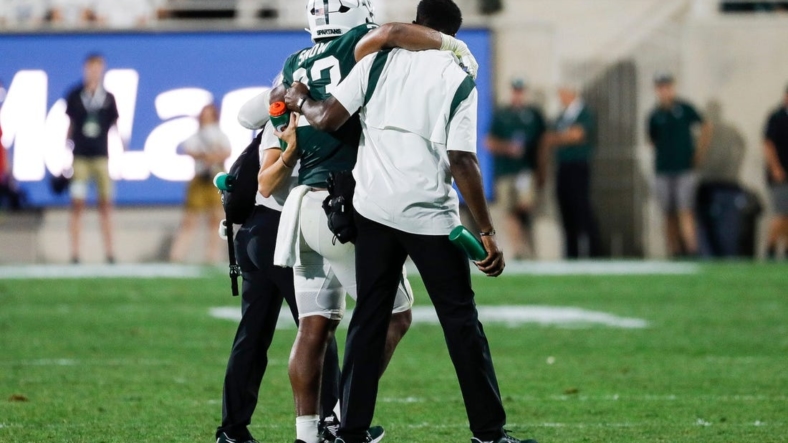 Tucker didn’t reveal specifics about the injuries. According to reports, Snow was worked on after a teammate accidently ran into his right leg in the second quarter, and Henderson was sporting crutches on the sidelines in the second half with a brace on his right leg.

Snow had 87 tackles, including 5.5 for loss, last season. He is the son of former Michigan State and NBA guard Eric Snow and the nephew of former Spartans All-American and NFL linebacker Percy Snow, who is a member of the College Football Hall of Fame.

“Snow is going to be out for the year,” Tucker said. “I feel terribly for him. He’s worked really hard and he’s playing at a high level. He won’t be with us for the rest of the season.”

Henderson considered declaring for the NFL draft after last season before deciding to stay in school. The team captain entered this season with 233 tackles, including 13.5 for loss, to go with three interceptions and three sacks. The 35-13 victory was his 47th appearance for the Spartans.

“He’s sore,” Tucker said of Henderson, “so we’ll just have to see how he comes along with his treatments and things like that. He’ll be ready when he’s ready.”

The Spartans host Akron on Saturday.