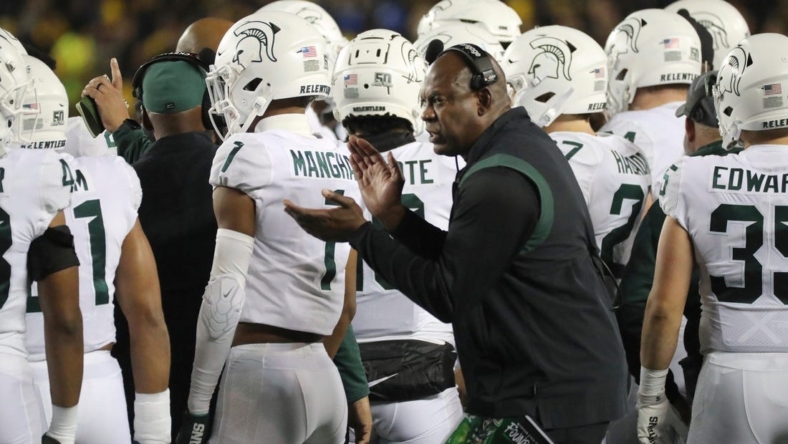 Michigan State officials said Sunday that players who confronted and threw punches at at least one Michigan player after their rivalry game on Saturday night will be held responsible and that the university will cooperate with any forthcoming investigations from police or the Big Ten.

Michigan defeated Michigan State 29-7, and after the game, video captured a group of Spartans players punching and kicking Wolverines defensive back Ja’Den McBurrows in the tunnel heading toward the locker room. Tempers had flared near the end of the game.

“As Spartans our program has a responsibility to uphold the highest level of sportsmanship,” Spartans coach Mel Tucker posted to Twitter Sunday morning. “While emotions were very high at the conclusion of our rivalry game at Michigan Stadium, there is no excuse for behavior that puts our team or our opponents at risk.

“In complete cooperation with law enforcement, the Big Ten Conference and MSU and UM leadership, we will evaluate the events in Ann Arbor and take swift and appropriate action.”

“I’m extremely saddened by this incident and the unacceptable behavior depicted by members of our football program,” Stanley said in a statement released by the school. “On behalf of Michigan State University, my heartfelt apology to the University of Michigan and the student athletes who were injured.

“There is no provocation that could justify the behavior we are seeing on the videos. Rivalries can be intense but should never be violent.

“Coach Tucker will be holding the players involved responsible, and our football team and university will be cooperating with all related investigations by law enforcement and the Big Ten Conference.”

Michigan coach Jim Harbaugh was visibly shaken after the game and called the incident an assault on two players, though the second player was not identified. Harbaugh said one of the players could have sustained an injury to his nose.

“Just like anybody, you want to protect your players,” Harbaugh said. “Ten on one, whatever it was, it was just bad. It needs to be investigated and brought to a conclusion. Our athletic director will make sure that that takes place.”

“What happened after the game is completely unacceptable. I’ve talked to the commissioner (Kevin Warren), he’s looking into it,” Manuel said. “The police are also looking into it, because they’ve seen the video and they’re addressing it. We will leave it in their hands, but this is not how we should interact after a game.

“This is not the way another team should grab a player and do what they did. It’s completely and utterly unacceptable. We will let the Big Ten and law enforcement handle it, but this is not what a rivalry should be about.”