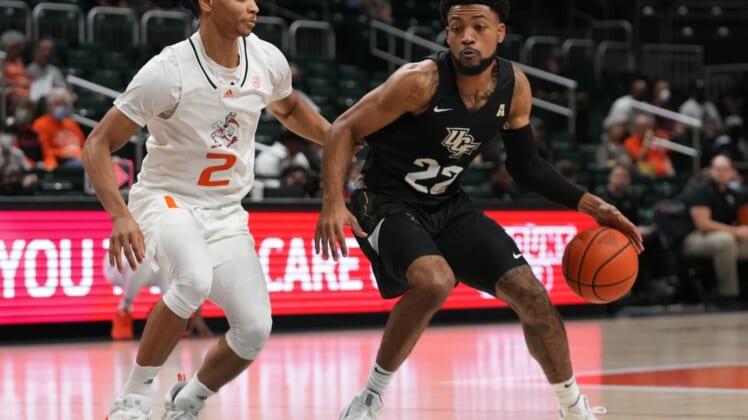 Both Michigan and Central Florida are in good shape in the NET rankings at this point of the season, but Thursday will provide quite an opportunity for each squad to earn a big boost in those rankings.

When Michigan visits Central Florida for an evening tip in Orlando, the game will present each side an opportunity to earn its first Quad 1 win of the season, since Michigan was No. 34 as of Wednesday in the NET rankings, while Central Florida was No. 50.

Michigan is returning from a lengthy layoff due to the holiday break and COVID-19 issues. The Wolverines haven’t played since they blasted Southern Utah 87-50 on Dec. 18.

A game scheduled on Dec. 21 against Purdue Fort Wayne was canceled for COVID-19 reasons.

Despite being relatively high in the NET rankings, the Wolverines (7-4) haven’t had the start to the season they had hoped for, but see the performance against Southern Utah as a catalyst to better things against Central Florida and beyond.

Michigan head coach Juwan Howard said he noticed a difference in his team during practice prior to the Southern Utah game.

“They came in with a lot of energy,” Howard said. “They were razor sharp with their focus. Nobody came in with their head down. Everyone had their eyes open and ears perking and (was saying), ‘Hey, let’s fix it.'”

Central Florida is off to an 8-2 start and will be playing its first game since Dec. 22, when they beat North Alabama at home, 75-64.

The Knights are seeking their fifth straight win.

“I like our team,” UCF head coach Johnny Dawkins said. “I think we can compete against anyone. We have to keep getting better. Like most teams, we definitely are not a finished product right now. It’s still early. We’re one-third through our season. I think there’s a lot of room for improvement in our team. I see it in them, and we have to try and get that out of them.”