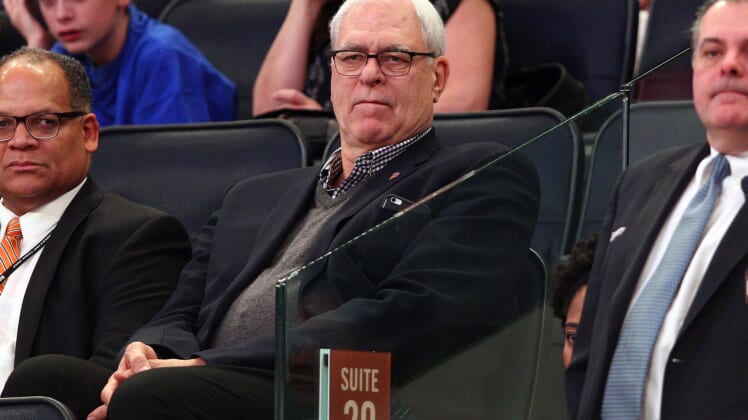 Michele Roberts, the executive director of the National League Basketball Players Association, does not have a high opinion of Phil Jackson.

Referring to comments made by Jackson about Anthony in April, Roberts made her opinion quite known.

“I think Phil was deliberately trying to shame ‘Melo out of the city,” she told The Vertical, per Harvey Araton of The Vertical.

According to Araton, Roberts doesn’t see Jackson’s comment, that Anthony would be “better off playing somewhere else,” as any different than what Markeiff Morris said in 2015 (“My future is not in Phoenix”) that earned him a $10,000 fine for being a “public statement detrimental to the NBA.”

Roberts sees it as a double standard by the NBA.

“I have players who are unhappy that this hasn’t been responded to by the league,” Roberts told The Vertical.

The big problem this presents, according to Roberts, is what will happen “when another GM gets it in his head that it’s OK to treat a player this way because Phil got away with it.”

As to why Jackson would be trying to shame Anthony out of New York, that answer is quite obvious. He needs Anthony to waive his no-trade clause. Period. Otherwise, the Knicks are stuck with Anthony and his $27.9 million contract.

Additionally, she said “The comments do damage to the game because they devalue the player and makes the fans who buy tickets question the value of the investment.”

“Our players understand that they can privately complain about how a team is managed but they cannot do it publicly without being subject to sanction,” she said. “But it has to work both ways. If Phil tells ‘Melo in private that being in New York is not a good fit for him, that’s his right. But these comments were made in public, and it’s very disturbing because Phil gave him the no-trade clause and he has to respect it. He’s got to allow a player to make a decision for any reason – to win a ring, for money, home life, whatever.”

We’ve argued that Anthony would be better off somewhere else.

But that’s besides the point. He needs to be able to make his own decision, rather than being shoved out the door, if fair practices are being observed. The Knicks made the decision to hand him a huge contract back in 2014 that didn’t seem like a great idea to many who observe the league. They also gave Anthony the benefit of a no-trade clause.

It’s quite possible Anthony might have already decided that New York isn’t going to give him the best chance to win going forward. Lord knows, he and Jackson have as fractious a relationship as there currently is in the Association. He also isn’t the right player to fit into the doomed Triangle offense Jackson is determined to implement in New York.

All that said, what Roberts is saying has merit. A double standard cannot exist. Not in this day and age. It’s going to be interesting to see what, if anything, develops on this front in the future.