Few know the full ire of the public like New York Jets’ quarterback Michael Vick. After spending over 540 days in prison for owning/operating a dog fighting ring, Vick slogged through an uphill battle back into the limelight and into fans’ hearts.

These two instances (Vick torturing and killing people’s pets, and Rice knocking out his girlfriend in an elevator in Atlantic City) are completely separate, yet similar in one major way. Both situations saw a fan-favorite  turn into a villain virtually overnight, unless you ask the Ravens’ PR department, but that is a story for another time.

According to The Star Ledger, Vick has reached out to the Ravens’ rusher imploring him to take a stand against domestic violence.  Vick has done the same thing with dog fighting in his five years of post lockup, speaking out and donating to organizations that help stop the assault on defenseless animals and put an end to a violent culture. Basically, Vick is advising Rice on how to not have everyone hate him forever.

This would be akin to Vladamir Putin speaking against annexation of territory, like Alex Rodriguez coming out as anti-PED, like Donald Sterling opening up an all-inclusive resort.  Sure Vick has the experience of a life-changing situation that altered his appearance in the public eye, but is he really the best choice to stand in Rice’s corner? 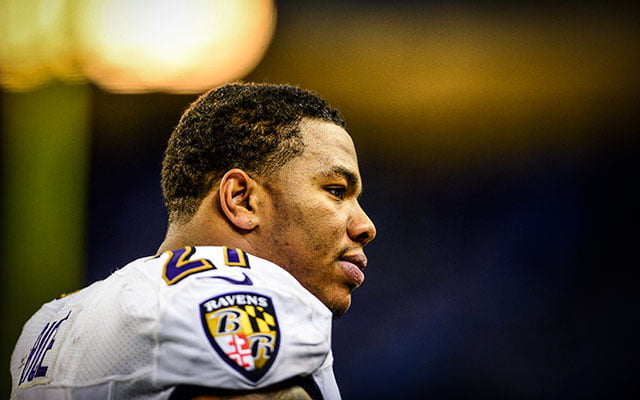 Courtesy of CBS Sports: Rice has a lot of work to do in order to rebuild his image.

At 27 years of age, Rice has the enormous task of regaining his image not just in Ravens’ nation, but in the public spectrum. Vick wants Rice to make it a priority that kids should know this is not the way to act. But is the NFL committed to the same thing? The league issued just a two-game suspension to Rice, a punishment that does not appear to fit the crime considering how Commissioner Goodell has handled other player’s transgressions in the past. How can one set an example against a major issue that encompasses more than the football community, if such a violation only warrants two games missed?

The league even balked when explaining the issue, pulling the wool over the eyes of fans that big-brother Rodger has everyone’s best issues at heart.

While it would be wise of Rice to speak out against this claim and he has,  the real example here should have been made by the NFL, not an ex-convict or alleged spouse-beater. At the very least, it appears Vick and Rice can bond out of this situation. And you know what they say about birds of a feather. Backup quarterback by day and mentor by night. At least Vick, who seems to truly have turned over a new leaf, can now help Rice get out of the doghouse (pun somewhat intended).