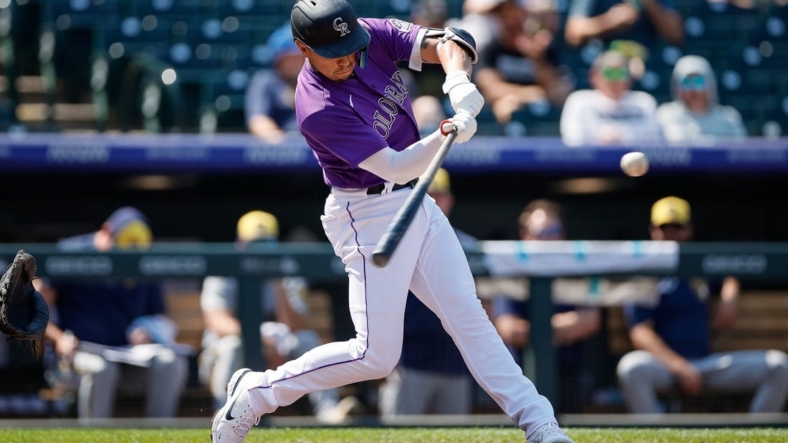 Michael Toglia homered among his two hits and drove in a career-high four runs, Alan Trejo also went deep and the Colorado Rockies beat the Milwaukee Brewers 8-4 in Denver on Wednesday.

Andrew McCutchen and Luis Urias homered and finished with two hits each for the Brewers (71-65). Milwaukee fell 3 1/2 games behind San Diego for the final National League wild-card spot.

The Rockies took the lead in the second inning against starter Eric Lauer. Brendan Rodgers singled with one out and scored on a double by Toglia, who went to third on an error by right fielder Hunter Renfroe.

Diaz singled to center to drive in Toglia and Trejo followed with his second home run of the season to put Colorado ahead 4-0.

The Rockies padded their lead in the third inning. Daza led off with a single, and after Lauer fanned the next two batters, he walked Rodgers. Toglia then homered to the left, his second of the season, to chase Lauer.

The Brewers finally broke through against Freeland in the fifth. Keston Hiura led off with a triple to right and after Urias struck out, Hiura scored on a groundout by Victor Caratini.

Freeland (8-9) retired 10 of the last 11 batters he faced before leaving. He allowed one run on two hits and struck out eight.

Milwaukee added another run in the eighth inning off Justin Lawrence. With one out, Tyrone Taylor singled and scored on Christian Yelich’s double to right.

McCutchen led off the ninth with his 15th home run and Urias also clubbed his 15th with two outs for the Brewers.

Milwaukee, with a doubleheader scheduled at San Francisco on Thursday, used infielder Jace Peterson to pitch the eighth inning. He set down the side in order.