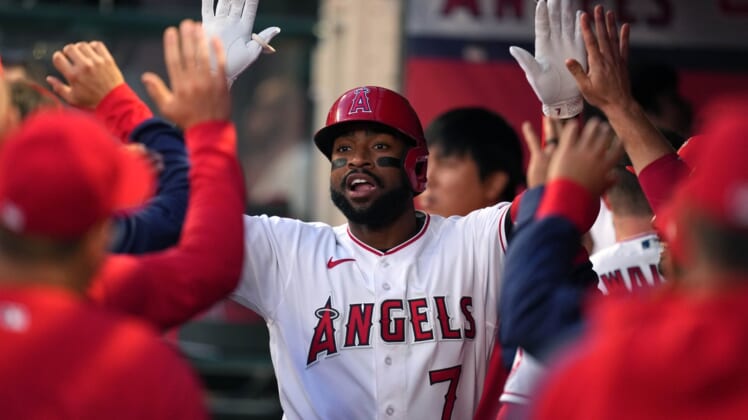 Michael Lorenzen pitched six strong innings while Brandon Marsh and Jo Adell each had a home run and an RBI double to lift the Los Angeles Angels to a 6-2 victory over the Miami Marlins on Monday night in Anaheim, Calif.

Lorenzen was born in Anaheim and grew up an Angels fan, but he spent the past seven seasons pitching for the Cincinnati Reds, primarily as a reliever. The Angels signed him to a one-year, $7 million contract to pitch as a starter, and it paid off in his debut for his new team.

Lorenzen (1-0) retired 18 of the 20 batters he faced, giving up only a double to Joey Wendle in the second inning and a solo home run to Jesus Sanchez in the fourth. The 30-year-old right-hander struck out seven and did not walk a batter while making 89 pitches.

Sanchez hit his second home run of the night in the ninth inning.

Lorenzen got all the run support he needed in the first inning when Marsh hit a three-run homer off Marlins starter Elieser Hernandez (0-1). Marsh got the start in center field in place of Mike Trout, who was scratched because of a stomach bug.

Adell led off the second inning with a homer, his first hit of the season after starting 0-for-9 with seven strikeouts.

Marsh and Adell both hit run-scoring doubles in the eighth.

The Angels jumped out to an first-inning lead against Hernandez when Shohei Ohtani singled, Max Stassi walked with two outs and Marsh unloaded on the first he pitch saw from Hernandez for a three-run homer.

After allowing the Sanchez homer in the fourth, Lorenzen retired the next nine Marlins hitters in a row to get himself through six innings for the first time since 2015, when he was a rookie with Cincinnati.

Hernandez wound up yielding four runs on five hits and three walks in 4 2/3 innings. He struck out six.

The contest was the opener of a two-game interleague series.