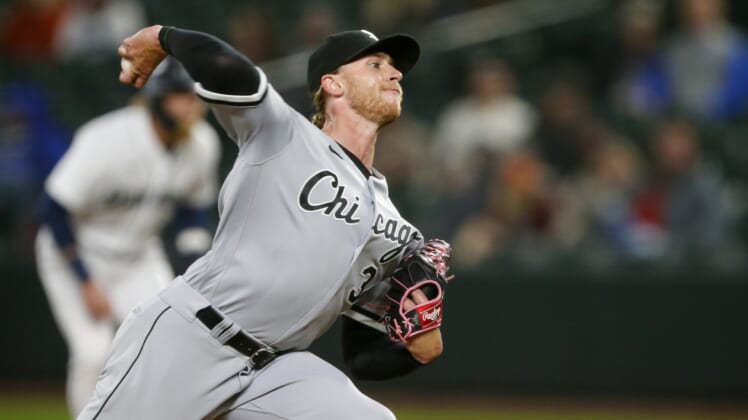 Michael Kopech was once thought to be a key cornerstone on the Chicago White Sox’ pitching staff of the future. Unfortunately, he was forced to undergo Tommy John surgery after his first five MLB starts in 2018, and only recently returned to the hill.

After overcoming all that adversity and years away from live game action, Kopech has returned in a role that makes him the ultimate secret weapon for Chicago manager Tony La Russa.

Yes, he has made just two appearances thus far in the young 2021 MLB season, yet these appearances have featured a pair of two-inning outings from the bullpen. If Kopech doesn’t ultimately return to a starting role, he may well have a great outlook as a reliever.

Michael Kopech is oozing with potential

Kopech is a hard-throwing hurler. He hits the high 90s on his fastball and gets considerable movement on his slider. He can power his way through at-bats and has prolific offerings. Kopech has tossed four scoreless innings thus far, posting eight strikeouts and surrendering only three baserunners.

The 24-year-old’s presumed middle-to-long relief role is ideal for the White Sox’ pitching situation as it stands. Offseason acquisition Liam Hendriks is the undisputed closer, and someone capable of pitching multiple innings, if need be. That has, of course, become commonplace for MLB relievers, but Kopech looks up to the task in that regard.

In the scenario that the team’s starting pitcher has to be removed from the hill midway through an outing, Kopech can come in and pitch a few innings. He represents a starting-caliber arm coming out of the pen.

The White Sox are rolling out a five-man starting rotation of Lucas Giolito, Dallas Keuchel, Lance Lynn, Dylan Cease and Carlos Rodon. It’s a sturdy unit with some upside, specifically with Giolito and Cease. Having said that, Keuchel and Lynn have been up and down over the last few seasons, and Cease is still a young starter.

This isn’t a flawless rotation, if you will. Having a pitcher who can throw two-to-three innings to get the ball to the back end of the pen is a godsend, and that’s precisely what Kopech appears fully capable of delivering.

Plus, let’s say that Cease and Rodon are inconsistent as the year progresses and/or the White Sox get hit hard by injuries. Kopech might get his shot to slide into the rotation if his form from these early appearances keeps up. It’d just take a little bit of adjusting on the fly, wherein Kopech would have to be eased in to his new role.

Chicago would be wise to moderate Kopech’s workload low to start and gradually work it up in this scenario, as he’s already acclimating to a new role and decreased workload. The point is that he offers La Russa an immediate plug-and-play starter.

Playoff baseball is a different animal, and one that requires having a multitude of versatile arms, especially if a team doesn’t have a bona fide ace. In the White Sox’ case, they have an ace in Giolito and a slew of reliable, versatile arms coming out of the bullpen. Outside of Kopech and Hendriks, the White Sox also have Aaron Bummer, Evan Marshall and Matt Foster at their disposal.

Michael Kopech can deal. He can bring the heat who has a knack for posting strikeouts at a high rate.

Now, he did post a not-so-promising 5.02 ERA and 6.16 FIP across his four starts in 2018, where he pitched to his tendencies and got his first licks at the big-league game. That said, Kopech’s refined role is best for him in both the short and long term.

Another encouraging sign: Per FanGraphs, since the Tommy John surgery, Kopech’s velocity on his slider has actually gone from 81 mph in 2018 to 85.8 on average in 2021, which makes it all the more difficult to hit.

Indeed, Kopech can throw hard but not empty the tank because he’s being asked to pitch multiple innings. His role isn’t one where he’ll throw six innings every five days or jam in a pair of hitters every other night. Rather, it’s an intermediary of the two.

The middle-to-long relief role allows Kopech to get in a groove and bodes well for his long-term outlook if he’s ever called upon to start. It’ll help build his stamina and arm endurance.

Given that the rotation is set for the moment, this is Kopech’s best option if he wants to stick in the big leagues. As for the White Sox, they’re making savvy use of a compelling pitcher. He beefs up the pen, offers rotation depth and could even serve as an opener if the White Sox end up deploying a bullpen day here and there. Kopech pitches the first two innings, and then it’s on to the next reliever.

Kopech could very well be one of the premier relievers in baseball this season if both sides are committed to this role for him. That only strengthens an already deep and potent White Sox team.

The best is yet to come for Michael Kopech, too. Again, he’s still just 24, and thankfully, the multi-year setback looks like it won’t derail his career. If anything, it appears to have strengthened his resolve as he continues down a promising path on this loaded 2021 Chicago club.