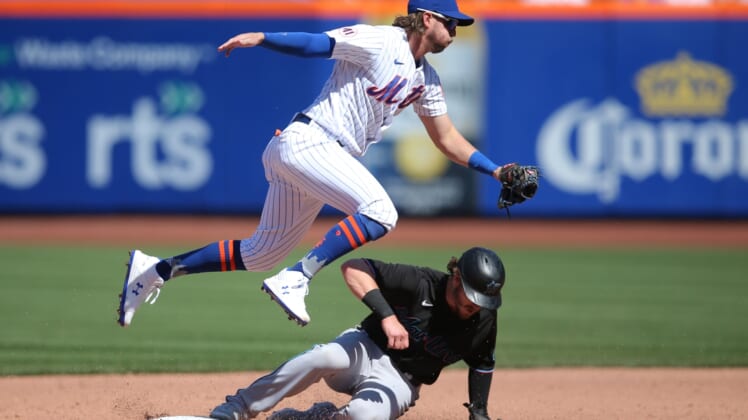 Michael Conforto drew a hit by pitch with the bases loaded Thursday afternoon to cap a two-run ninth inning comeback by the New York Mets, who won their new era home opener by edging the Miami Marlins, 3-2.

Major league umpire Ron Kulpa admitted that he erred in his call that gave the Mets the walk-off victory. In the bottom of the ninth with the game tied 2-2, Kulpa, home plate umpire for the game, began to call Conforto out on strikes but instead awarded him first base after ruling the ball grazed Conforto’s arm on a pitch from the Marlins’ Anthony Bass. The Marlins argued the call but to no avail.

“The guy was hit by the pitch in the strike zone. I should have called him out,” Kulpa told a pool reporter.

The Mets improved to 39-31 all-time in home openers, including 9-4 at Citi Field, while the Marlins lost their fourth straight.

A sellout crowd of 8,492 — 20 percent of capacity — turned out for the Mets’ first game in front of fans at Citi Field since Sept. 29, 2019, and the first home game under new owner Steve Cohen, who bought the team in November.

The Mets were in danger of suffering another frustrating early-season loss before Jeff McNeil, celebrating his 29th birthday, led off the ninth by homering to right off Bass (0-2), who blew his second save opportunity in as many chances.

One out later, pinch-hitter Luis Guillorme beat out an infield single. Brandon Nimmo followed with his third hit, an opposite field double, for the Mets’ first hit of the game in 16 plate appearances with runners on. New York is hitting .237 (14-for-59) with runners on this season.

After Francisco Lindor was intentionally walked, Conforto fell behind 1-2 before a Bass pitch just grazed his elbow. Conforto, who was hitless in his first four plate appearances with runners on base, raced to first and the Mets mobbed him as Bass moved toward home plate and Marlins manager Don Mattingly came out to argue. Umpires reviewed the play, which stood after 58 seconds.

“It was a strike and (home plate umpire Ron Kulpa) went to call it a strike. He didn’t get hit by a pitch. He got hit by a strike,” Mattingly said after the game. “If it’s a strike, how can it be a hit by pitch?”

Corey Dickerson and Jesus Aguilar had RBI hits in the sixth for the Marlins off Mets starter Taijuan Walker. Dickerson finished 2-for-4.

Walker, who signed a two-year deal with the Mets in February, carried a no-hitter into the fifth in his New York debut and allowed the two runs on four hits and two walks while striking out four over six innings.

Marlins rookie right-hander Nick Neidert allowed one run on three hits and five walks while striking out three over 4 1/3 innings in his first big league start.