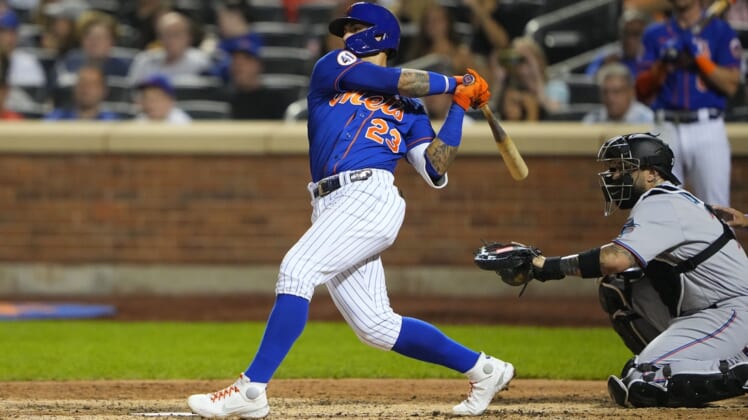 It was New York’s third straight win – and that doesn’t count the Mets’ 6-5 walk-off victory earlier Tuesday afternoon – since that was the resumption of an April 11 game.

The Mets survived a shaky performance by second baseman Jonathan Villar. He had an error that led to an unearned run, and he was thrown out off second base, which cost New York a run.

Yet, Mets pitchers held the Marlins to just the one run on five hits. New York starter Trevor Williams allowed just four hits, no walks and one unearned run in 4 1/3 innings, but since he didn’t go the required five innings for a starter, the win went to reliever Aaron Loup (4-0).

Edwin Diaz pitched a perfect seventh for his 27th save in 31 chances this year.

Marlins starter Edward Cabrera, in just his second major league appearance, pitched three scoreless innings before the Mets scored in the fourth. Villar singled and when Brandon Nimmo singled on a ground ball to short, Villar was thrown out after rounding too far beyond second base.

Facing Conforto (0-1), Cabrera slipped off the mound and fell … and Conforto smacked the next pitch 435 feet into the upper deck in right field.

Later in the same inning, Javier Baez singled and scored on Jeff McNeil’s double, giving the Mets a 3-0 lead. Marlins center fielder Magneuris Sierra took a bad route on McNeil’s double, allowing the ball to roll to the warning track.

Miami scored an unearned run in the fifth, thanks to Villar’s fielding error. Miami’s Jesus Aguilera, one of baseball’s best RBI men, made the Mets pay. Serving as a pinch hitter, he flipped an opposite-field RBI down the right-field line.

The Mets brought in Loup, who — after a walk to load the bases — got Isan Diaz to ground into a double play.

The Marlins threatened in the sixth of the seven-inning game, putting runners on second and third and one out. But Seth Lugo struck out Sandy Leon and Magneuris Sierra, ending Miami’s final threat.