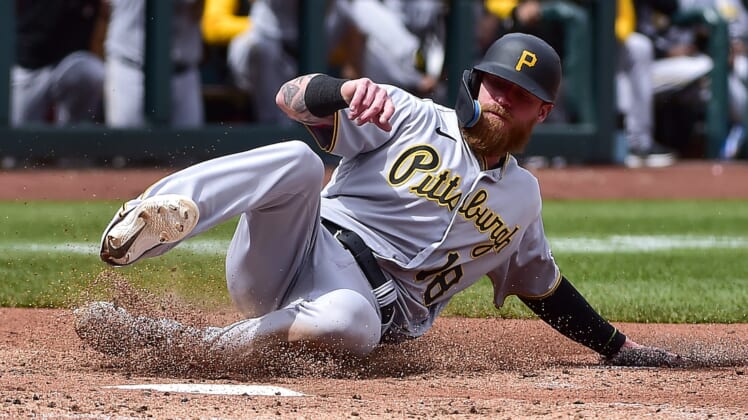 Michael Chavis went 3-for-4 with a grand slam for the visiting Pittsburgh Pirates as they rallied past the St. Louis Cardinals 9-4 Sunday.

Diego Castillo went 3-for-5 and scored twice for the Pirates, who erased a 3-0 first-inning deficit to earn their first victory this season.

Nolan Arenado hit a two-run homer for the Cardinals. He is 6-for-12 (including three doubles, two homers), with four runs and seven RBIs in the first three games of the season.

Skip Schumaker served as acting manager of the Cardinals for the second straight game with manager Oliver Marmol out with the flu.

The Cardinals broke out to a 3-0 first-inning lead. Dylan Carlson led off with a double, advanced on Paul Goldschmidt’s single, and scored on Tyler O’Neill’s sacrifice fly. Arenado followed with his two-run homer.

The Pirates surged ahead 5-3 in the third inning. Singles by Roberto Perez, Ke’Bryan Hayes and Bryan Reynolds set the stage for Chavis’ grand slam. Then Castillo singled and scored on Kevin Newman’s double.

The Pirates pushed their lead to 7-3 in the fourth inning while knocking Matz out of the game. Perez walked, Ben Gamel singled, and Hayes followed with a RBI single to force the pitching change.

In the seventh, Castillo hit a two-out single, Newman walked, and Jake Marisnick added an RBI single to expand Pittsburgh’s lead to 8-3.

The Cardinals got a run back in their half on singles by Harrison Bader and Tommy Edman followed by Carlson’s sacrifice fly.

Gamel made it 9-4 Pittsburgh in the eighth inning by hitting a double and scoring on Carlson’s throwing error.