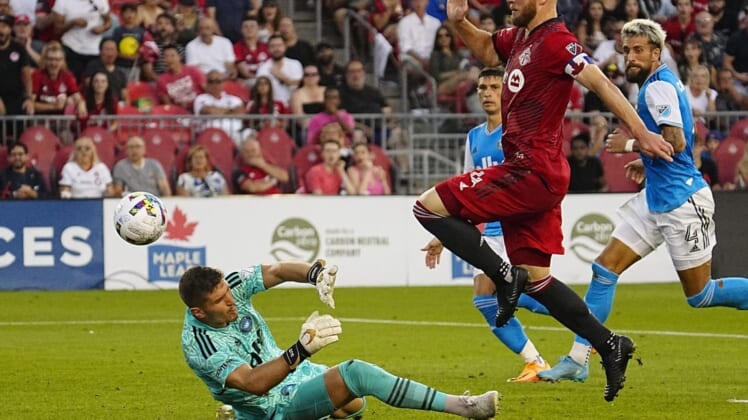 Federico Bernardeschi tallied a goal and an assist and Lorenzo Insigne had an assist in their MLS debuts.

Jonathan Osorio gave the home side a 1-0 lead in the fourth minute.

Insigne tried to feed the midfielder at the top of the box, but the ball bounced quickly out of reach. Charlotte defender Guzman Corujo tried to clear but his attempt hit Osorio on the back just outside the goal area and bounced into the net.

Bradley made it 2-0 in the 10th minute off a corner from Bernardeschi, heading it in from the right side of the goal area into the far side.

The visitors struggled to generate any form of attack and were held without a shot attempt through the first 13 minutes.

Mark-Anthony Kaye sent a short touch-pass over to Bernardeschi outside the box and the Italian international struck quickly from long range to push the lead to 3-0 in the 31st minute.

Karol Swiderski had a chance for Charlotte in the 34th minute when he found himself alone in front of goalkeeper Alex Bono on the right side, but Bono made the save.

Bradley’s second of the match extended it to 4-0 in the second minute of first-half stoppage time. Insigne fed a back-heel pass outside the box to a streaking Bradley and the Toronto captain maintained possession as he made his way in, firing from just above the goal area.

Charlotte defender Christian Fuchs was shown a red card in the 65th minute after taking down Jayden Nelson, leaving the visitors with 10 men for the remainder of the match.

Charlotte was denied on another rare opportunity in the 76th minute on a distance shot from Kerwin Vargas that forced Bono into a diving stop.