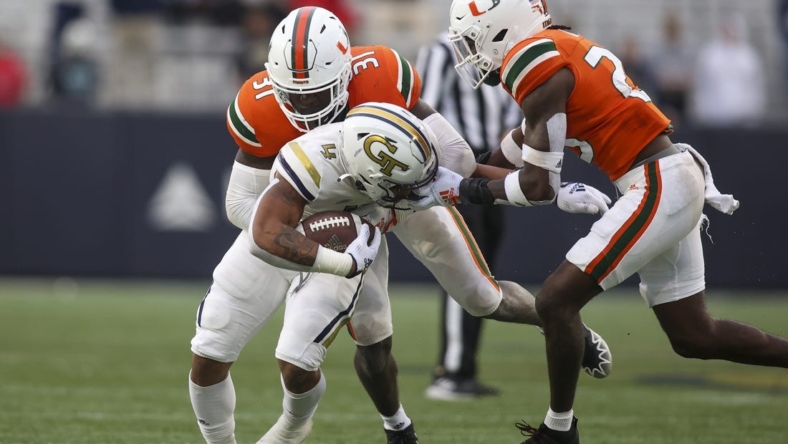 Miami (5-5, 3-3) intercepted four passes, including one that was returned for a 99-yard touchdown by Kinchens. Tyrique Stevenson had the other interception, and Kinchens leads the ACC with six picks.

His first two TD passes were to tight ends — Will Mallory and Jaleel Skinner. Both tight ends started those plays in the backfield. For Skinner, a true freshman, it was his first career TD.

Miami running back Jaylan Knighton rushed 16 times for 118 yards and one touchdown.

Georgia Tech (4-6, 3-4) was led by true freshman quarterback Zach Pyron, who made his second start, and wide receiver Nate McCollum.

Pyron, who left the game with 13:03 in the fourth quarter due to an apparent injury, led the Jackets with 66 yards rushing. He also completed 12-of-22 passes for 114 yards, one touchdown and two interceptions.

McCollum caught eight passes for 100 yards and one touchdown.

Miami, which hadn’t scored a touchdown in nine consecutive quarters, ended that drought on the game’s first possession. The Hurricanes went 75 yards on 11 plays, scoring on Brown’s 22-yard pass to Mallory, who beat linebacker Charlie Thomas. Brown was pressured by Sylvain Yondjouen on the play, which was the second pass of the drive.

The Hurricanes went up 14-0 in the second quarter on a 14-play, 93-yard drive. The march ended with a play-action fake and a four-yard TD pass to Skinner. It was only the second completion on the drive.

With 30 seconds left in the half, Pyron threw a nine-yard TD pass toward the back of the end zone to McCollum, beating Stevenson to cut Georgia Tech’s deficit to 14-7. That capped a 15-play, 99-yard TD drive that included three third-down conversions.

But Miami took a 21-7 lead with 7:52 left in the fourth as Brown lobbed a eight-yard TD pass to Young. That capped a 51-yard drive that was set up by Kinchens’ second interception. That pick was off of Jackets backup quarterback Zach Gibson.

Miami put the game away with Knighton’s two-yard TD run and Kinchens’ pick-six.