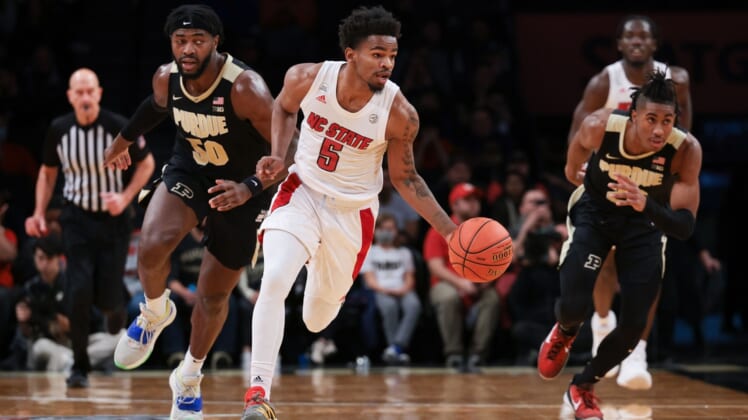 Jordan Miller scored a season-high 25 points and Isaiah Wong produced 15 of his 19 points in the second half as Miami earned a 91-83 win over North Carolina State on Wednesday night in Coral Gables, Fla.

Anthony Walker added 11 points off the Miami bench, making all four of his shots from the floor and 3 of 4 free-throw attempts. He contributed four rebounds and two blocks.

The Hurricanes, who trailed by as many as eight points in the second half, responded with a 30-11 run to take control.

NC State (7-6, 0-2) was led by Jericole Hellems, who scored 24 points. The Wolfpack also got 14 each points from Terquavion Smith and Dereon Seabron and 13 from Thomas Allen. Seabron added 11 rebounds and six assists, but NC State took its fourth loss in a row.

Miami center Sam Waardenburg was ruled out of the game prior to tipoff due to COVID protocols. That left a huge void on the boards for the Hurricanes.

The Wolfpack outrebounded Miami 41-32, including 18-6 on the offensive glass.

NC State led 41-40 at halftime, thanks primarily to an 11-3 advantage in second-chance points. The Wolfpack had a 26-14 rebound advantage over the first 20 minutes, including an 11-2 edge in offensive boards.

That rebounding work negated Miami’s 3-point shooting (7-for-13). NC State shot just 3-for-14 from distance before the break.

NC State pushed to its largest lead of the game at 62-54 on a Hellems layup with 12:27 left in the second half.

Wong, though, picked up a loose ball and dunked over an NC State defender to cut Miami’s deficit to 64-60 with 10:09 left. That slam seemed to ignite the Hurricanes, who took their first lead of the second half, 76-73, on a Wong 3-pointer with 4:39 left, capping an 8-0 Miami run.