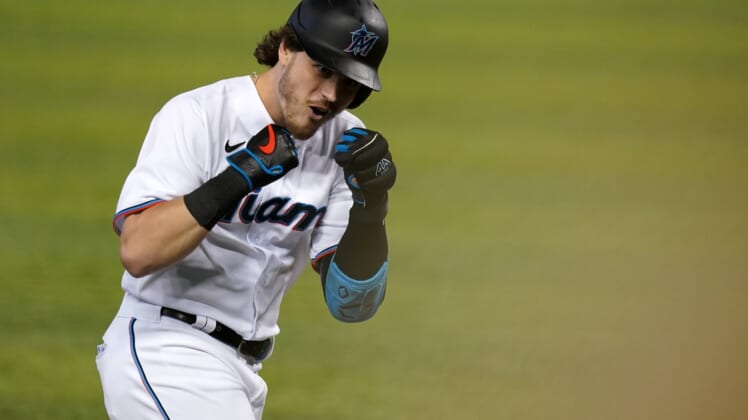 Jesus Aguilar stroked an opposite-field, go-ahead single as part of a six-run eighth inning, leading the host Miami Marlins to a 9-3 win over the Arizona Diamondbacks on Tuesday night.

Brian Anderson slugged a three-run homer in his first at-bat off the injured list. In addition, reliever Richard Bleier (2-0) earned the win by inheriting a bases-loaded situation with a 3-3 score in the eighth before striking out three straight batters, all swinging.

Marlins center fielder Lewis Brinson, playing in place of injured standout Starling Marte, had a big game, hitting a three-run homer and a double. He also threw out Asdrubal Cabrera, who was trying to stretch a single into a double in the fifth inning.

Diamondbacks right fielder Josh Rojas slugged his fourth homer in the past five games. Cabrera also chipped in for the Diamondbacks, going 3-for-5.

Arizona got two players off the injured list in time for this game: first baseman Christian Walker (oblique) and outfielder Tim Locastro (finger), who was used as a pinch-runner. Each of them scored a run.

Neither starting pitcher got a decision.

Miami’s Sandy Alcantara allowed six hits, one walk and two runs (one earned) in six innings. He also struck out six and stranded the bases loaded in the second inning.

Miami led 3-0 in the first on Anderson’s opposite-field homer to right on a 3-1 fastball.

Rojas homered in the fifth, pulling a 1-0 slider just over the fence in right, extending his extra-base-hit streak to five games. That cut Arizona’s deficit to 3-1.

The D-Backs added an unearned run in the sixth as Walker hit a leadoff single and scored from first when Marlins rookie second baseman Isan Diaz threw wildly to second on an attempt to start a double play.

Arizona tied the score 3-3 on Eduardo Escobar’s eighth-inning RBI single off reliever Anthony Bass. After an error loaded the bases, Bleier struck out the next three batters to keep the score tied.

Kevin Ginkel (0-1) took the loss, allowing three runs in the eighth. Miguel Rojas started the rally with a leadoff double. Aguilar’s RBI single made it 4-3. Aguilar then scored on a wild play that concluded with a throwing error by catcher Stephen Vogt.

Brinson’s homer, also in the eighth, iced the game.