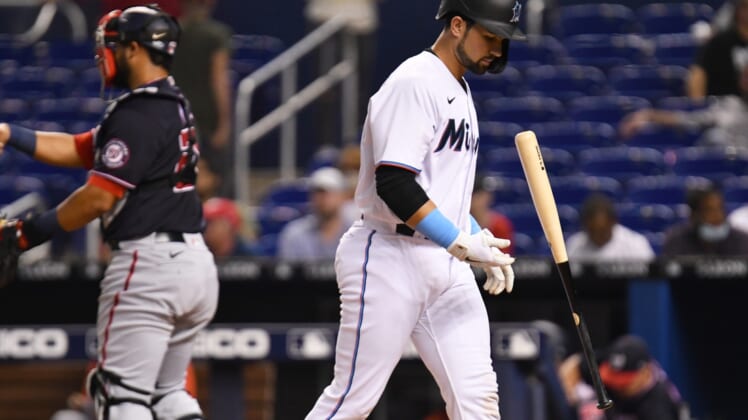 Jazz Chisholm Jr., who opened the 10th inning on third base, stole third and scored on a game-ending wild pitch, leading the Miami Marlins to an 8-7 win over the Washington Nationals on Monday night.

Besides scoring the winning run, Chisholm also had the first two-homer game of his career. Chisholm, who finished with three runs and three RBIs, has 22 steals and 17 homers this year.

Washington (61-89) was led by rookie catcher Keibert Ruiz, who went 3-for-5 with a career-high four RBIs in a battle between the two teams at the bottom of the National League East standings.

The Marlins (64-86) were powered by rookie right fielder Jesus Sanchez, who drilled a two-run homer and also overran a fly ball before reaching back to pluck it with his ungloved right hand.

Washington also got a homer from Lane Thomas.

Nationals starter Erick Fedde, who is 4-0 with a 1.43 ERA in seven career starts against the Marlins, left with a lead but got a no-decision after allowing four runs (two earned) in five innings.

Washington jumped on top in the first inning on Ruiz’s two-run single.

Thomas stretched Washington’s lead to 3-0 in the second with his sixth homer, off lefty Marlins starter Jesus Luzardo, who also got a no-decision. Thomas entered the game hitting .440 this year against lefties and .160 against righties.

Miami tied the score 3-3 in the third. With two outs, Chisholm hit a 415-foot solo homer. After a fielding error by shortstop Alcides Escobar, Sanchez pulled a 415-foot dinger, his 13th.

Washington took a 6-3 lead in the fifth. Juan Soto walked, Josh Bell doubled and both runners scored on a one-out Ruiz single. After Carter Kieboom was hit by a pitch, Luis Garcia flicked an opposite-field RBI double.

Miami cut its deficit to 6-4 in the bottom of the fifth on Chisholm’s 427-foot homer, his 17th of the year.

Washington stretched the lead to 7-4 in the seventh as Kieboom walked and eventually scored on a wild pitch.

Miami tied the score 7-7 in the bottom of the seventh, getting RBIs from pinch hitter Miguel Rojas (groundout) and Chisholm (sacrifice fly). The tying run scored on a second Escobar fielding error.

In the top of the 10th, automatic runner Garcia was tagging up and failed to score on a Thomas double off the right field wall that bounced away from Sanchez. That proved crucial when Washington was kept off the board as Bell was called out at first via interference, resulting in an inning-ending double play.

Dylan Floro (6-6) pitched one scoreless inning for the win.

Sam Clay (0-5) got the loss after failing to record an out.