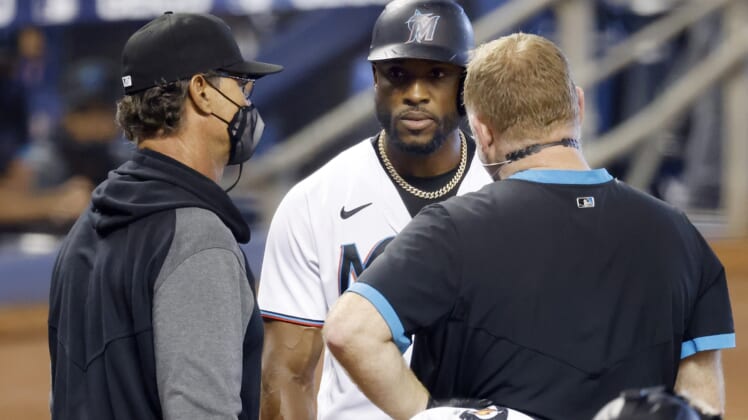 Apr 18, 2021; Miami, Florida, USA; Florida Marlins batter Starling Marte (6) talks to manager Don Mattingly (8) before being removed due to injury during his at bat in the ninth inning against the San Francisco Giants at loanDepot Park. Mandatory Credit: Rhona Wise-USA TODAY Sports

Miami Marlins outfielder Starling Marte will miss at least one week after being diagnosed with a fractured left rib.

The Marlins said Monday that an MRI exam detected a non-displaced fracture in Marte’s 12th rib. He will be re-evaluated in five to seven days.

Marte suffered the injury while batting in the ninth inning of Sunday’s 1-0 loss to the San Francisco Giants. He tried to persuade manager Don Mattingly to let him continue the at-bat but was declined.

The Marlins will miss Marte, who is batting .316 with two homers, eight RBIs and three steals in 15 games this season.

“I mean, he’s a big part of what we do,” Mattingly said. “He’s that guy, that cog in the offense, defense, on the bases. Obviously, you see what happened last year when he gets hurt. You don’t really replace that. We don’t have a replacement for that.”

The 32-year-old Marte is in his first full season with the Marlins. He was acquired from the Arizona Diamondbacks at last season’s trading deadline.

Marte spent his first seven-plus seasons with the Pittsburgh Pirates. He has a .287 career average with 116 homers, 455 RBIs and 252 steals in 1,029 major league games.

Marte is a two-time Gold Glove winner and was a member of the 2016 National League All-Star team.