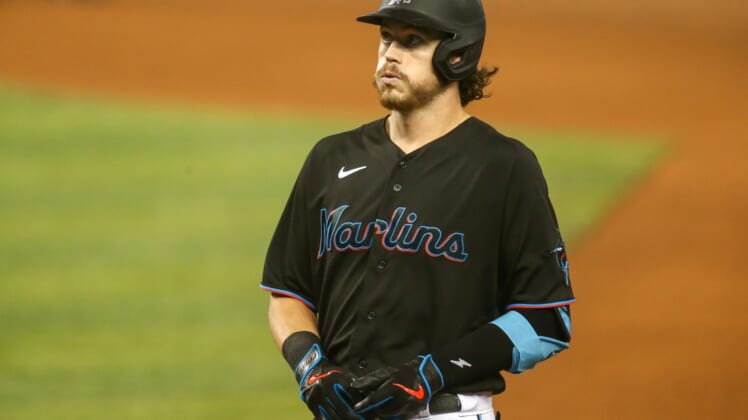 The Miami Marlins placed third baseman Brian Anderson on the 10-day injured list because of a left oblique strain, the team announced Thursday.

Anderson, who has struggled this season thus far after leading the Marlins in home runs in 2020, was placed on IL retroactive to April 21, according to the Miami Herald.

In corresponding moves, the Marlins called up infielder Jose Devers in addition to right-hander Jordan Holloway, with both being recalled from the team’s alternate training site.

Anderson, who turns 28 next month, has gotten off to a slow start this season, hitting just .183 with one homer and five RBIs in 16 games. He led the Marlins with 11 home runs and 38 RBIs in last season’s truncated campaign. He had his 2019 season cut a bit short after suffering a broken hand that August as he was tops on the team at the time in home runs (20), doubles (33), RBIs (66) and runs scored (57).

The 21-year-old Devers, who is a cousin of Boston Red Sox third baseman Rafael Devers, will be in the majors for the first time in his young career. Originally acquired by Miami in the blockbuster trade that sent outfielder Giancarlo Stanton to the New York Yankees in 2017, he has yet to play above the Single-A level.

The 6-foot-6 Holloway, 24, has pitched in two games with the big league club — one in the 2020 season and one so far this year. He has delivered 2 1/3 scoreless innings allowing two hits with three strikeouts and one walk.