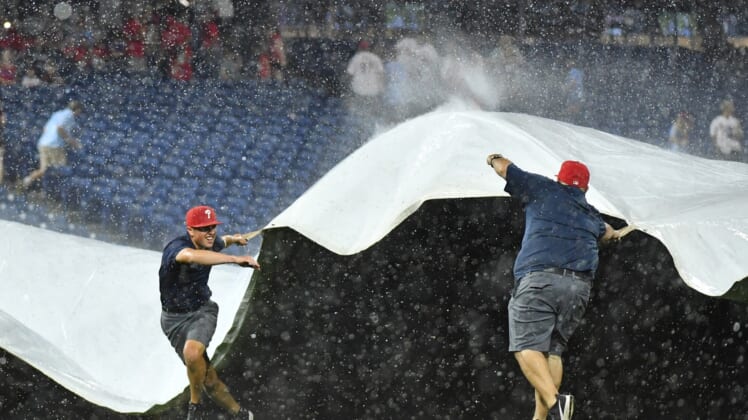 Jun 30, 2021; Philadelphia, Pennsylvania, USA; Members of the Philadelphia Phillies Grounds Crew pull the tarp over the infield during a rain delay in the fifth inning against the Miami Marlins at Citizens Bank Park. Mandatory Credit: Eric Hartline-USA TODAY Sports

Heavy rain passing through the northeast on Thursday forced the postponement of the Philadelphia Phillies’ home game against the Miami Marlins.

The game will be made up as part of a single-admission doubleheader in Philadelphia on July 16, the first day after the All-Star break. The first game of the twin bill will start at 4:05 p.m. Rain also interrupted the clubs’ meeting Wednesday, though they managed to finish.

The National League East rivals had split the first two meetings of their three-game series, with Philadelphia winning 4-3 on Tuesday and Miami responding with an 11-6 win Wednesday. The Phillies are 3-7 in their last 10, while the Marlins have managed three wins over their last five.

Before the game, Philadelphia designated right-hander Neftali Feliz for assignment.