Miami Marlins hold on to clip the Philadelphia Phillies 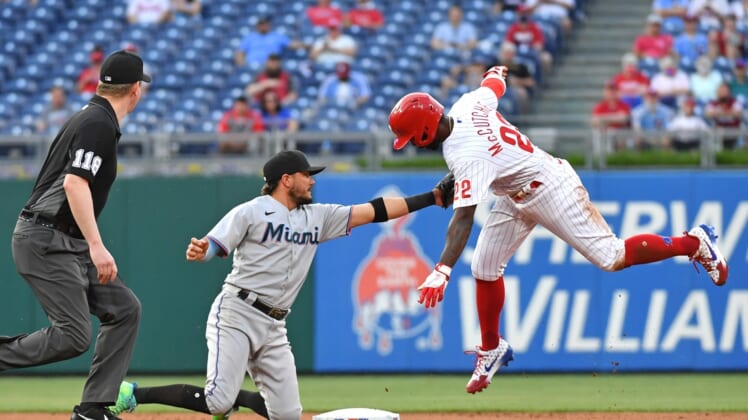 Brian Anderson homered, Adam Duvall had two hits and an RBI and the Miami Marlins defeated the host Philadelphia Phillies 3-1 on Wednesday.

Yimi Garcia recorded the final four outs to earn his eighth save.

Andrew McCutchen homered for the Phillies.

Ronald Torreyes and Rhys Hoskins contributed two hits each, but the Phillies managed only seven overall.

Catcher J.T. Realmuto missed his third straight game with a contusion at the base of his left hand.

The Marlins jumped out to a 1-0 lead in the second inning when Anderson crushed a 399-foot solo home run to right-center field.

In the third, the Phillies opened with consecutive singles by Odubel Herrera and Torreyes. But the Phillies went down in order from there.

Miami’s Miguel Rojas doubled to start the sixth and advanced to third when Jesus Aguilar flied out to the wall in center. Duvall followed with an RBI single to left for a 2-0 lead.

The Phillies closed within 2-1 in the sixth when McCutchen ripped a solo homer to left.

The Marlins loaded the bases with no one out in the seventh, including Rogers’ first Major League hit against Brandon Kintzler. Jazz Chisholm hit a swinging bunt about 15 feet down the third base line and Garrett Cooper scored for a 3-1 advantage. Sam Coonrod struck out Duvall swinging with the bases still loaded to end the threat.

Herrera opened the eighth with a walk on four pitches and Torreyes followed with a single to right. Pinch hitter Brad Miller grounded into a 4-6-3 double play and McCutchen lined out to end the inning.

Jean Segura doubled to begin the bottom of the ninth and Bryce Harper struck out. Hoskins singled to place runners at first and third. Alec Bohm struck out and Andrew Knapp flied out to the wall in right-center to end the game.