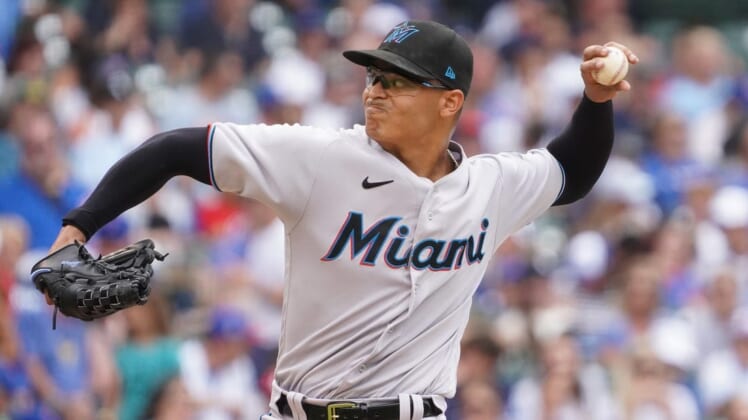 Left-hander Jesus Luzardo returns to Oakland for the first time since his shocking trade last year as the Miami Marlins go for a three-game sweep of the Athletics on Wednesday afternoon.

The Marlins have used stellar starting pitching to gain the upper hand in the interleague series, which matches Miami and Oakland for the first time since 2017.

Hoping to follow in the footsteps of Edward Cabrera and Pablo Lopez, who combined for 14 innings of shutout ball the past two nights, Luzardo (3-5, 3.44 ERA) figures to create a divided rooting interest among what likely will be a third consecutive small turnout in Oakland.

Acquired in July 2017 from the Washington Nationals, Luzardo was considered to be a key piece in Oakland’s future until management decided the A’s needed an offensive boost at last year’s trade deadline. As a result, Luzardo was dealt to the Marlins for pending free agent Starling Marte.

Now 24 years old, Luzardo insists his old fans will see a new pitcher coming out of the visitors’ dugout.

“I feel like in the past, my fastball command, if I were to throw a bullpen (session), I could dot all four corners without a problem,” he said this week. “Then I’d get in the game and I was just trying to do too much.

“I feel like now, I’m just understanding that my stuff is good enough, and I just need to throw it in the zone, especially my fastball. Just let it play in the zone.”

Luzardo is coming off one of his best outings since joining the Marlins, having limited the host Los Angeles Dodgers to one run and four hits in 6 1/3 innings during a no-decision on Friday. He has allowed zero or one runs in five of his 10 starts this season.

“I feel like that’s probably the best game I’ve thrown in my career,” Luzardo said of his effort against the Dodgers. “I know I’ve gone seven scoreless and stuff like that, but against a lineup like that in such a great atmosphere, just kind of using all my mix. I used sinkers, I used four-seams, I used the breaking ball, I used the changeup. I felt like I had good command of it all.”

Luzardo admitted this week he “felt like (the A’s) gave up on me,” something Oakland general manager David Forst maintained was far from the truth in explaining the deal last summer.

“It’s not easy to trade a player like Jesus,” Forst said. “Ultimately, we always said when the team in this clubhouse performs and puts themselves in a playoff position, it’s on us to do whatever we can to try and help them.”

Luzardo is expected to duel former teammate Cole Irvin (6-11, 3.33 ERA). The left-hander has lost his past four starts, allowing 11 runs, 10 earned, in 12 innings over his last two outings against the Houston Astros and Seattle Mariners.

Irvin has never started a game against the Marlins, but saw them twice in relief as a member of the Philadelphia Phillies in 2019 and 2020, allowing four runs in four innings.

The A’s will attempt to bounce back from a Tuesday defeat in which they were shut out until the ninth inning.

“We waited too long offensively tonight,” Oakland manager Mark Kotsay said. “You’ve got to give credit to (Lopez), too. The last two nights, these two (Miami) starters have really pitched well.”

He added of his players, “They fight, and it showed again tonight. … The didn’t shut it down, and they haven’t done that all year.”