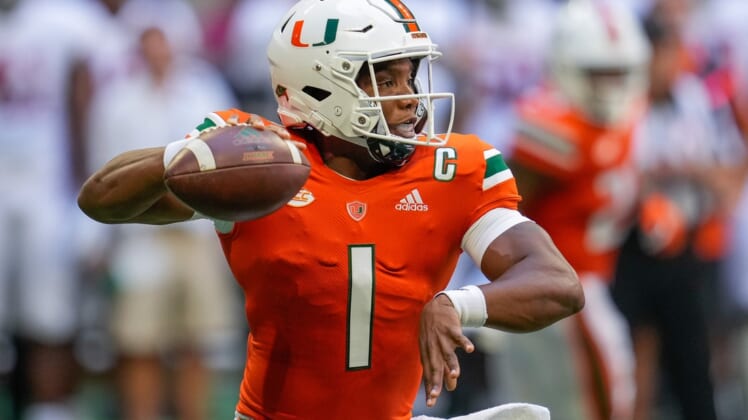 Diaz told Miami’s 560 WQAM that freshman Tyler Van Dyke will be the starter for the Hurricanes (2-3, 0-1 ACC) moving forward.

King sustained the injury during a 38-17 loss to Michigan State on Sept. 18. He left in the third quarter after his shoulder was driven into the turf on a tackle by Spartans linebacker Quavaris Crouch.

After medical attention, he returned and stayed in the game and set Miami single-game records for completions (38) and attempts (59). He passed for 388 yards with two touchdowns and two interceptions.

King has had a difficult run in terms of health. The sixth-year senior spent the offseason recovering from surgery on the torn ACL he sustained in the Cheez-It Bowl — a loss to Oklahoma State — in late December.

Van Dyke started the Hurricanes’ most recent game, a 30-28 loss to visiting Virginia on Sept. 30. He completed 15 of 29 passes for 203 yards with one touchdown and also rushed for a score.