NBA insiders believe Miami Heat could acquire Russell Westbrook, but only after being waived

In the minds of several NBA executives and scouts, the Miami Heat makes a lot of sense as a future home for Los Angeles Lakers star Russell Westbrook. However, that possibility would not come via a straight trade between the two organizations.

Aside from the Lakers deciding their next coach, after dismissing Frank Vogel after the season, what the team would do with 2021 addition Russell Westbrook has been the biggest story for the team this offseason. However, unlike Brooklyn Nets superstar Kevin Durant when he requested a trade, few teams are getting the Lakers on the phone to add the former league MVP.

Westbrook is owed a massive amount of money in the upcoming season, and the 33-year-old seems to be in the early stages of his athletic decline. Not to mention his talent and personality are divisive. A swap for disgruntled Nets star Kyrie Irving was likely the team’s best option, however, that is now off the table with Brooklyn planning to bring Irving back in 2022-2023.

The one hope the Lakers have to move Westbrook would be the Utah Jazz. The Lakers were rumored to be active in conversations between the Jazz and Knicks as the third team in a possible Donovan Mitchell trade. Despite Mitchell being moved recently, a deal with the Jazz is still possible since Utah reportedly is interested in getting the Lakers unprotected first-round picks in 2027 and 2029. If a deal were to happen, that is where the Miami Heat could come into play.

In a Wednesday column, Fox Sports NBA insider Ric Bucher reported that various executives and scouts around the league believe Miami would be a destination for Westbrook if rumors are true that the Jazz would likely cut him following a trade. 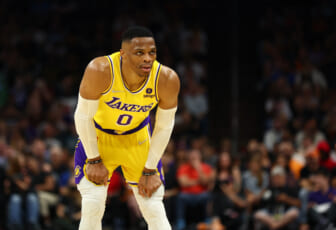 Also Read:
Los Angeles Lakers owner on Russell Westbrook: ‘From my point of view, he was our best players last year’

The Jazz releasing Westbrook makes a lot of sense. While he is still an impact player, the nine-time All-Star’s personality would not be a good fit for an organization in a complete rebuild after trading Mitchell and Rudy Gobert this summer. Plus, they will surely be looking to rack up losses to increase their lottery chances and develop the players they received from the Cavaliers in the deal for Mitchell.