The Miami Heat are interested in forward Kelly Oubre Jr., per Jake Fischer. What does the market look like for Oubre and how would he fit with the Heat?

The NBA offseason is underway and Miami Heat rumors are already flying as the front office has some work to do this summer with free agency approaching. Miami is interested in Kyle Lowry as their top target, but other names are being thrown out there too.

Let’s dive into the free-agent market for the 25-year-old forward and how he might fit in Miami.

While the Heat have been thrown around as leverage on many occasions, their reported interest in Oubre dates back to June.

The Dallas Mavericks, San Antonio Spurs, and New York Knicks are three other teams that have been linked to the talented wing. Each team has an ample amount of cap room to sign free agents this summer.

There have been reports that Oubre wants to play for a contending team, which is why the Golden State Warriors are interested in bringing him back.

A report says Oubre could earn $15 million per year during free agency this summer. Miami would be able to make cap room for Oubre or swing a simple sign-and-trade with Andre Iguodala if they want to acquire him, but he shouldn’t be their first priority.

Watch for the Heat’s decision on Iguodala’s team option by 5:00 pm EST on Sunday. 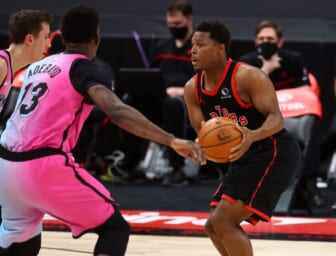 Oubre Jr. would bring length and athleticism to the Heat if they were able to acquire him. Oubre is 6-foot-7 with a 7-foot-3 wingspan and can leap out of the gym.

Looking at Oubre, you would think he’d be an elite defender, but he hasn’t fully developed on that end of the floor yet. He made some strides last season, but there is still room for improvement.

The question to ask is whether Oubre would fit due to the players they already have on the roster. Jimmy Butler and Bam Adebayo are locked in the starting lineup, with Duncan Robinson a near-lock if he returns. 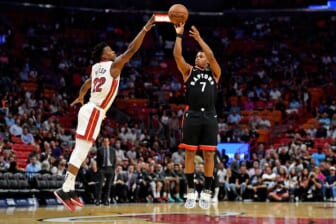 Unless Oubre is going to play the four, it doesn’t make much sense to acquire him with a contract of around $15 million per year. However, the Warriors did play Oubre as a small-ball power forward when he was coming off the bench last season.

If all else fails, maybe the Heat sign-and-trade for Kelly Oubre Jr. and play him as a small-ball four next to Adebayo.