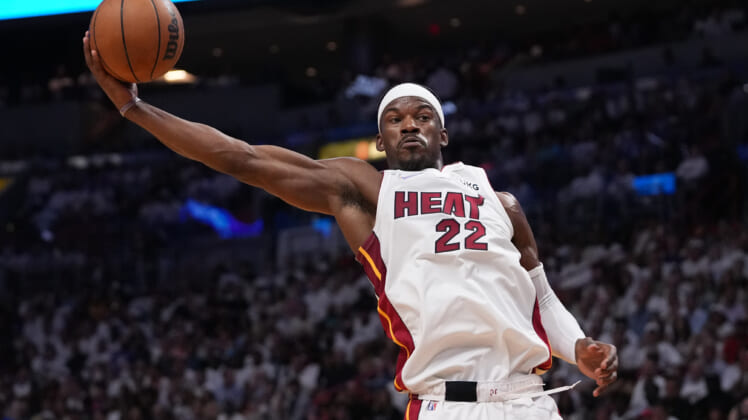 Game 2 of the Miami Heat vs Philadelphia 76ers second round NBA playoff series is in the books with Philly taking a 2-0 series lead thanks to another convincing double-digit victory.

For the Heat, it’s a continuation of what they’ve done all season. Beating their opponents thanks to a suffocating defensive attack combined with deadeye shooting ability, receiving contributions from several members of a deep rotation.

Yet, for the 76ers, this latest loss represents a darkly dangerous point in their season that could soon signal the end of their postseason play. Obviously no one in Philly is quite ready for this reality after another strong regular season.

After their latest Eastern Conference duel, here are four quick takeaways from game two of the Heat vs 76ers playoff battle.

Once again, Jimmy Butler continues to make playing basketball look relatively easy thanks to another dominant effort in which he dropped 22 points (but not 23), 12 assists, six rebounds and two steals. It’s his fourth 20/5/10 playoff performance with the Heat, behind just LeBron James and Dwyane Wade in franchise history.

But it’s not just the points or his scoring ability. It’s everything Jimmy Buckets does on both ends of the court plus inside the locker room that helps propel his teams to victory.

The assists show just how much of a team player he is, and setting the tone defensively helps embody what Miami Heat basketball is all about under the guidance of Pat Riley along with coach Erik Spoelstra’s passion. It’s fun to see it play out in the playoffs, and if the Heat can take Game 3, Butler has a strong chance of heading back to the Eastern Conference Finals for the second time in his career.

Not only do the Heat have a strong starting five, their bench unit is among the very best in the NBA, which has been on full display throughout the playoffs. Sure, Tyler Herro is the star of the show, coming off winning Sixth Man of the Year, but it’s not just his sharpshooting that makes the Heat a nightly threat.

As we saw during Game 2, it’s also thanks to the sudden strong play of Victor Oladipo who played all of eight games during the regular season. Now that he’s healthy, Oladipo appears to be heating up, scoring 23 points in Game 5 against the Hawks and now another 19 points in Game 2 while sinking 75% of his shots from distance.

The entire Heat team shot a scalding 48.3% from three-point range on 29 shot attempts. It’s safe to say, the Heat will be tough for anyone to beat if we continue hearing “He’s on fire!” throughout the playoffs. For now, it’s a great start and their 2-0 series lead should have Heat fans stoked across the nation.

Who knows what may have happened had Joel Embiid been able to suit up for this one. But there should be no doubt in anyone’s mind who the best 76er to take the floor was for Game 2. It was Tyrese Maxey, by far.

As last season showed us, Maxey was ready for a bigger role heading into year two of his NBA career, but no one likely anticipated the 21-year-old guard becoming one of the very best players on the team. Not this soon anyway.

Instead, that’s exactly the role Maxey assumed in Game 2, where he took over the game at one segment, scoring 11 consecutive points for the Sixers.

In all, Maxey scored a game-high 34 points, playing a team-high 43 minutes. If you want to talk about a team leader stepping up in Embiid’s absence, look no further than Maxey. Unfortunately as we know, it wasn’t enough to come away victorious, but Maxey is looking like the future in Philly paired with Embiid.

Yeah, James Harden, we don’t know what’s up with your bad play either, he’s not the only one who’s upset. After dropping just 16 points in Game 1, Harden dropped a deuce again in Game 2, ending with 20 points. Harden’s now shooting just 39.2% against the Heat in this playoff series. He can’t afford to not show up for Game 3 otherwise the team might as well make vacation plans immediately following the matchup.

If Harden struggles once again, he may very well be looking at finding yet another team to play for to begin the 2022-23 NBA season.