May 29, 2021; Miami, Florida, USA; Miami Heat forward Udonis Haslem (40) looks on from the bench after a loss to the Milwaukee Bucks in game four during the first round of the 2021 NBA Playoffs. at American Airlines Arena. Mandatory Credit: Sam Navarro-USA TODAY Sports

Udonis Haslem’s run with the Miami Heat will extend to a 19th season, the team announced on Sunday.

Several reports last week indicated that Udonis, a member of three NBA title teams with the Heat, would be returning. The team did not announce terms of the contract, although previous reports expected him to sign a one-year, $2.6 million deal.

The 41-year-old Haslem, a team captain for 14 seasons and who holds the longest streak by any active player with only one team in the league, is the oldest player in franchise history. 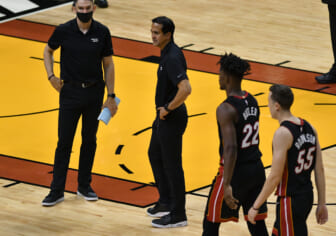 Also Read:
3 Reasons why the Miami Heat can win the Eastern Conference next season

Haslem’s role has been mostly as a team leader over the past few seasons. He has played in only 82 games since the 2015-16 season.

Haslem played in just one game during the 2020-21 season, playing only three minutes before being ejected in a game against the Philadelphia 76ers.

He has averaged 7.6 points and 6.7 rebounds per game in 859 appearances (500 starts). He was originally signed as an undrafted free agent in August 2003 out of Florida.