The Miami Heat have some difficult decisions to make with their rotation if everyone is healthy. Here's a look into the Heat's situation with their guards. 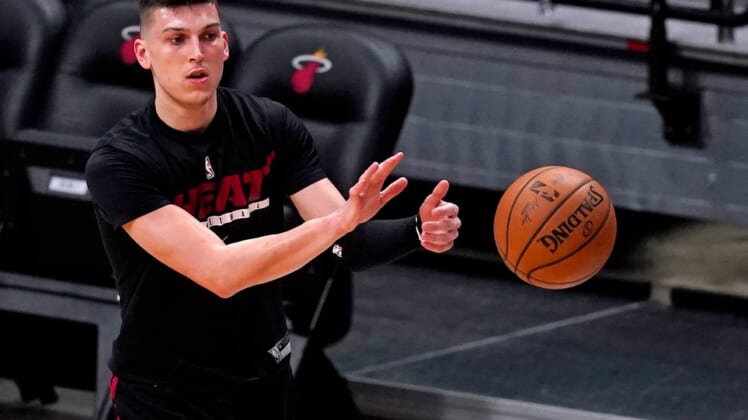 The Miami Heat are going to have some tough decisions to make when it comes to which guards are in the rotation come playoff time. They have been rolling with Kendrick Nunn as the starting point guard with Victor Oladipo out, and Tyler Herro still remains sidelined with a foot injury.

Goran Dragic has been plagued with injuries, but he’s finally starting to turn it around, scoring 18-plus points off the bench in three of the last four games. There’s limited room, though, and Miami can’t play all four guards in the NBA Playoffs.

Usually depth is a good thing, especially with COVID-19 still being an issue on teams, but the Heat are going to be forced into making difficult choices soon.

First off, it’s been reported that Oladipo suffered a patellar subluxation, which would sideline him for four to six weeks from the time of the injury. Oladipo suffered the injury on April 8 versus the Los Angeles Lakers. That would make it exactly four weeks since his injury.

Coach Erik Spoelstra said last week that Oladipo was making progress on his knee, so there’s some positive news in that area.

If he can return in that four to six-week timeline, Oladipo could return as early as this week or the week the playoffs begin. But, would the Heat use him or continue on with their current rotation when Tyler Herro returns from his injury that has kept him out since April 24?

Well, Miami should stick with Duncan Robinson, Jimmy Butler, Trevor Ariza, and Bam Adebayo in the starting lineup. The point guard position will most likely be between Oladipo, Herro, Dragic, and Nunn. Right off the bat, those are eight quality players who could possibly start.

Then, you have to include Dewayne Dedmon, who is a must-play, and Andre Iguodala to make that 10 players. If Spoelstra did play a 10-man rotation, Miami would have three guards coming off of the bench. The Heat should make a decision on who to sit during the playoffs and insert them whenever needed.

Which Miami Heat guards should be in the lineup?

The circumstances surrounding Miami’s guards are all different. Dragic has struggled during stretches this season due to injuries and a short offseason. However, when he was healthy during the playoffs in 2020, he provided a spectacular spark to the offense.

Oladipo has been sidelined due to that knee injury, but in the four games he played with the Heat, the team had exactly what they wanted defensively. Plus, it took the load off Butler and Adebayo when one of them was not on the floor.

Nunn has been used primarily as a starting point guard, but with Oladipo, he didn’t play a single minute alongside him and rode the bench. He has been good as of late and outside of Miami’s last game against Dallas, he was shooting efficiently.

Herro has been out due to a foot injury, but even before he was sidelined, he scored 10 or fewer points in four of the six games he played. The 21-year-old guard is in kind of a similar position as Oladipo since he has been out recently.

Depending on health, Oladipo and Dragic should be two of the four guards that play. That would run Miami’s rotation to eight players. One of those guards could start and the other could come off of the bench with Iguodala and Dedmon.

However, if Spoelstra would want another guard coming off of the bench for nine players, it would be a decision between Nunn and Herro.

Should the Miami Heat rely on Kendrick Nunn or Tyler Herro more?

The Heat have used Nunn as a starter and Herro as a bench player for a majority of the season. This would be important if Oladipo does return this season. If Oladipo doesn’t return, then this conversation is for naught.

Nunn has been playing out of his mind recently and is in a rhythm, while Herro continues to be out. If you are looking at it from a logical standpoint, Nunn deserves to play over Herro, but Oladipo starting and Nunn being used as an extra body when he played could be telling.

Herro had high expectations coming into this season as the starting point guard, but it didn’t last long before he was demoted to a bench role. He wasn’t openly disappointed about not being a starter and has put solid numbers coming off of the bench with 13.9 points, 4.3 rebounds, and 3.2 assists in 34 games.

Personally, I would start Oladipo, if healthy, and bring Nunn off of the bench. This would leave Herro as an extra body off of the bench in case someone gets hurt or if a player gets into foul trouble. It could also be a good idea if they want to ride a hot hand between Dragic, Nunn, and Herro.

Herro’s defense has been a liability this season and teams such as the Philadelphia 76ers and Brooklyn Nets will target him on defense, even if Miami doesn’t switch everything on defense. That would be the main reason behind my decision to use Herro as insurance for Oladipo.

However, based on what we have seen, I doubt the Heat would go this route because they have been more willing to bench Nunn instead of Herro. Either way, the Heat will need to figure out what to do if everyone gets healthy. If not, Miami won’t have to make these difficult decisions.