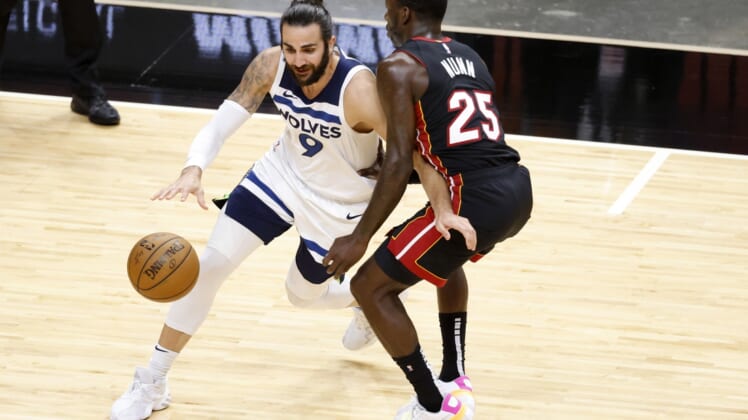 Tyler Herro scored 27 points to spark the host Miami Heat during a 121-112 victory over the Minnesota Timberwolves on Friday night.

Herro, who missed the previous six games due to an injury to his right foot, sparked the Heat (36-31) with 14 first-half points on 4-of-4 shooting from 3-point range. Herro finished with a season-high six made 3-pointers on eight attempts.

Butler finished with 25 points, eight rebounds, six assists and five steals as Miami climbed up to sixth place in the Eastern Conference and one game ahead of the Boston Celtics. The Heat’s next two games are at Boston on Sunday and Tuesday.

Miami also moved to within half a game behind fifth-place Atlanta.

Minnesota (20-47) lost its third in a row despite Karl-Anthony Towns’ 27 points, six rebounds and four assists.

The Heat shot 53.5 percent in the first half and 50.6 percent overall, and their bench outscored the Timberwolves’ reserves 57-19.

Goran Dragic added to Miami’s depth once again off the bench, scoring 15 of his 23 points in the first half. Dragic was clutch late as well, making back-to-back 3-pointers in the final two minutes to help Miami pull away.

Minnesota keyed on Bam Adebayo for most of the night defensively, but he still managed to score 15 points on 6-for-10 shooting. Kendrick Nunn also had 12 points.

The Heat played without Victor Oladipo (right knee) for the 15th consecutive game.