Miami Heat steal one from Boston Celtics: 4 takeaways from Game 3 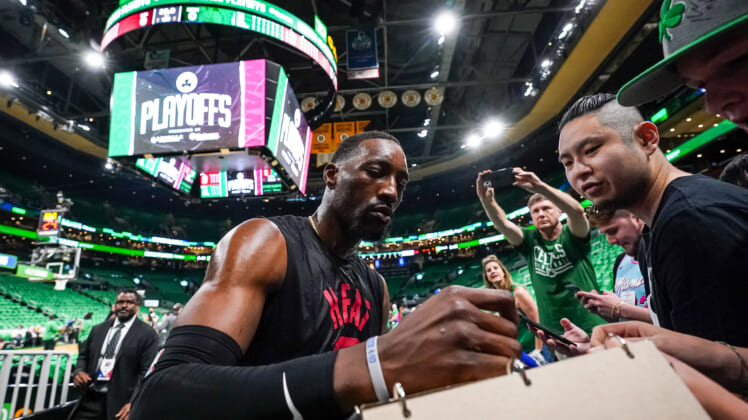 The Boston Celtics chose to leave their fans out to dry at the TD Garden heading into a tied series against the Miami Heat. With Game 3 taking place on Saturday night, Jayson Tatum was nowhere to be found, disappearing like the pot of gold at the end of the rainbow.

Instead, the Heat ran the table, leading from wire to wire as the Celtics were without Robert Williams, their starting center. It proved to be a big loss in this one.

The win places the Heat ahead in the series with a 2-1 lead, heading into Game 4 on Monday.

We break down the top four takeaways from the Heat’s six-point Game 3 victory on Saturday night.

With the Celtics missing their leading rebounder and shot-blocker, the Heat were able to dominate the paint. Bam Adebayo in particular came into the game hungry and kept going back for another plate, leading the Heat in scoring with 31.

But the toughness from the entire Heat lineup helped set the tone in Kyle Lowry’s first game back since Game 4 of the Eastern Conference Semifinals. From P.J. Tucker’s defensive effort filling out the stat sheet, to every starter aside from Max Strus coming away with multiple steals, it took everyone tonight to get the W.

Instead of seeing the three-point barrage commonly found in South Beach, the Heat had 48 points in the paint compared to the Celtics getting 34. Even though it was a different formula, it led to a win, which is likely all the Heat could care about.

Too many Celtics turnovers, not enough shots

Obviously the top goal in any basketball game is to score more points than the other team. The Celtics made that task extremely tough on themselves Saturday night, by turning the ball over 23 times. In comparison, the Heat turned the ball over just eight times. The Heat forced many of the turnovers themselves, finishing with a franchise playoff record of 19 steals.

It ultimately led to the Heat taking a total of 22 more shots than the Celtics. Incredibly, the C’s actually shot a better percentage than the Heat, but the number of shots proved to be an insurmountable factor on Saturday night.

The game took a turn shortly before halftime with the Celtics going on a 10-0 run. We didn’t know it then, but Jimmy Butler was experiencing right knee inflammation and didn’t come out for the second half.

In the beginning minutes of the second half, we saw Marcus Smart go down with what appeared to be an ugly ankle injury that very well could have knocked him out for the duration of the playoffs, but he came storming back just a few minutes later.

Smart would go on to lead an inspired effort, but it wasn’t quite enough to help bring his team to victory in Game 3.

Celtics fans were at full throat, making their presence felt down the stretch with the Celtics fighting back in the last few minutes of the game. Yet their team couldn’t reward their loyalty by coming up just short in this one.

Heat played 12 players and they all contributed

As we’ve seen throughout the playoffs, the Heat benefited from several different contributors thanks to a deep bench unit. Although we didn’t see the best effort out of the NBA’s Sixth Man of the Year, with Tyler Herro shooting 4 of 15, with eight points, other strong contributions from Caleb Martin and Victor Oladipo helped the Heat stay alive.

At the end of the day, it was Miami’s starters who were the difference makers, with all but Max Strus ending with a positive plus-minus, but it’s rare to see a team play as many as 12 players in the playoffs. Some of it was by necessity with Butler missing the second half, but for a large part of the bench to see game action in what ended up being a close game has to galvanize the locker room.

Chances are, the bench will put forth a better effort in Game 4 on Monday night.