The Miami Heat face the Cleveland Cavaliers on the first night of a back-to-back. Here's what the Heat need to do to take control of the game on Saturday night. 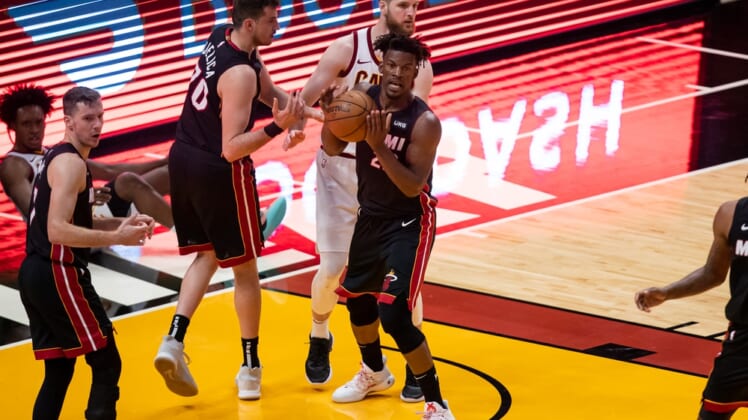 The Miami Heat take on a struggling Cleveland Cavaliers team on the first night of back-to-back Saturday night. The Heat have won five of their last seven games without Victor Oladipo, who is sidelined with a knee injury, while the Cavaliers have lost five in a row and 10 of their last 12 games.

Cleveland hasn’t played great teams during the last five games, with the best team being a red-hot Washington Wizards team. Miami has taken control of an easy schedule down the stretch to develop consistency and there is no reason for this not to continue on Saturday.

But, what does Miami need to accomplish against the Cavaliers to not force Jimmy Butler to carry the team like he did against the Minnesota Timberwolves?

The Miami Heat need to win the bench minutes

The Miami Heat have lacked consistency off of the bench for the last week, which hasn’t been aided by Tyler Herro remaining out due to an injury. However, the Cleveland Cavaliers present the perfect opportunity to right the ship.

In the last week, the Cavaliers rank two spots ahead of the Heat with the 26th best bench scoring-wise in the NBA. They also shoot worse from the field than the Heat and rank 28th in that regard. Miami needs to take advantage of a poor bench unit.

This is also taken at a higher degree of concern due to the injuries currently on the Cavaliers. Larry Nance Jr., Taurean Prince, Isaiah Hartenstein, Matthew Dellavedova, and Dylan Windler all missed Friday night’s game while rising star Darius Garland left the game with an ankle injury.

The most important thing to know is that Cleveland is on the second night of a back-to-back. They should be conservative with their players since there is no reason to push them. With some of their key bench players out, Miami has no excuse to fall short during these stretches.

The Miami Heat need to win the rebounding battle

Dewayne Dedmon has provided very solid minutes since he signed with the Miami Heat and has helped the team with its rebounding problems. Dedmon hasn’t played over 20 minutes once in a Heat uniform but has brought down five-plus rebounds in five of seven games.

Cleveland ranks 26th in the NBA in field goal percentage the last week, so if Miami can limit the offensive boards, they will have a great shot at taking control of the game from the tip. Cleveland also has been dead-last in three-pointers while shooting 27.5% from beyond the arc.

Miami has ranked 11th in opponent three-point percentage over the last three games and that should continue as their defense continues to develop consistency with the absence of Victor Oladipo. This all sets up perfectly for the Heat to create a low-scoring game for the Cavaliers by stealing rebounds, which will play into their favor.

Second-quarter woes need to end for the Miami Heat

The Miami Heat’s second-quarter woes haven’t been a secret for teams who have gone against them. Miami on many occasions has taken an early lead by the end of the first quarter, only to be outscored in the second period. The Cleveland Cavaliers may present an interesting challenge.

Cleveland is tied for sixth in the last four games in points allowed in the second quarter. The upside to this is that in the three other quarters, the Cavaliers rank outside the top-20 spots of points allowed. Cleveland has generally been a better second-quarter team.

Outside of the fourth quarter, the Heat only struggle in the second quarter of games. Luckily for Miami, the Cavaliers are below the mid-pack of fourth-quarter play during this stretch of the last four games.

The Heat is allowing teams to shoot an absurd 63.5% from the field in the fourth quarter, which is last in the NBA. The Cavaliers rank just ahead of them in 29th with an allowed field goal percentage of 58.9%.

If Miami takes care of their second-quarter woes, the game should not be close by the time the fourth quarter rolls around, rendering that issue moot.

This is a weak Cleveland team overall with dubious depth and lacking star power. Miami needs an easy win to maintain its pace with other teams in the Eastern Conference, and hopefully, the starters can be rested in the fourth quarter on the first night of a back-to-back.