Miami gets by UNC Greensboro in second half 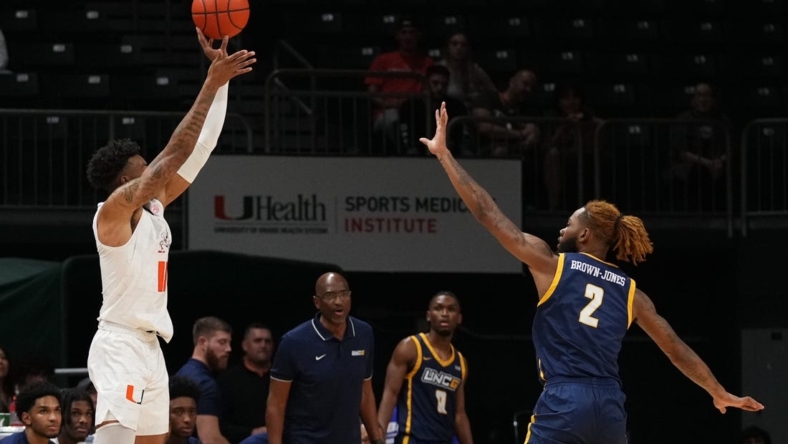 Miller made 8 of 12 shots, including 3 of 6 on 3-pointers. He also grabbed seven rebounds and added two steals and two assists.

Miami (2-0) trailed by one point at halftime, but the Canes came back to win their sixth straight game when trailing after 20 minutes.

The Canes shot just 3 of 10 on 3-pointers in the first half, but after intermission they made 10 of 17 from deep.

Miami got 15 points from Isaiah Wong and 14 points from Nijel Pack. The Canes also got a game-high 11 rebounds from Norchad Omier.

The Canes got a boost off the bench from Harlond Beverly, who played just four games last season before being lost to injury. On Friday, he made a career-high three 3-poiners and finished with nine points. He missed just one shot from deep.

There were seven lead changes and three ties in a first half that ended with UNC Greensboro on top, 34-33. The Spartans led by seven twice.

Miller led all first-half scorers with 12 points, making 5 of 6 on field goals with two 3-pointers.

The second half started with 3-pointers by Pack and Wooga Poplar, giving Miami a 39-34 lead. The Canes never trailed again.

For the game, Miami outshot UNCG from the floor, 53.4 percent to 41.4 percent. The Canes were plus-six on rebounds, and they also held the Spartans to 8 for 24 on 3-pointers.

Among the fans in the stands were Heat star Bam Adebayo, former NBA standout Carlos Boozer and James Bouknight of the Charlotte Hornets.