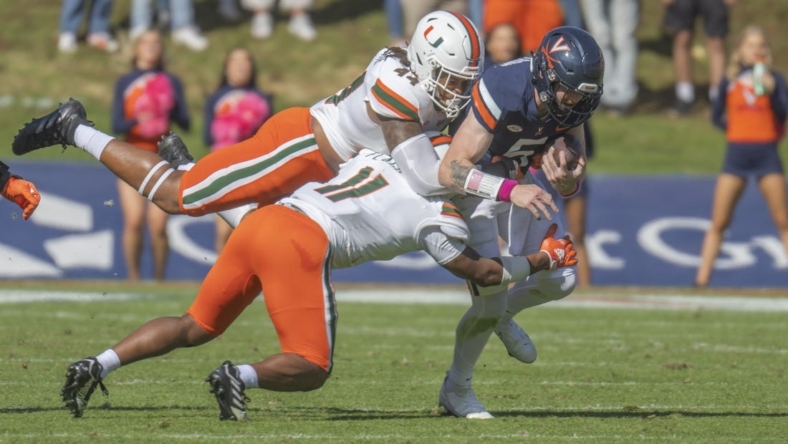 Jake Garcia rushed for the game-winning two-point conversion in the fourth overtime to lead Miami to a 14-12 victory against Virginia on Saturday afternoon in Charlottesville, Va.

Garcia, who started for the injured Tyler Van Dyke, completed 15 of 29 passes for 125 yards during what was mostly a defensive struggle as the Hurricanes (4-4, 2-2 Atlantic Coast Conference) were held to 272 total yards.

But Miami’s defense stood its ground and Andres Borregales made four field goals, including two in the first two overtime possessions to keep the Hurricanes in it.

Virginia (3-5, 1-4) had a chance to win in the third overtime once the teams had to go for two-point conversion plays.

Antonio Clary intercepted Garcia in the back of the end zone on the Hurricanes’ first two-point conversion try. But the Cavaliers, after a false start penalty backed it up to the 8-yard line, failed to score when Miami’s Tyrique Stevenson broke up a fade pass in the corner of the end zone intended for Dontayvion Wicks.

Virginia quarterback Brennan Armstrong’s pass into the back of the end zone in the fourth overtime sailed too far and Lavel Davis Jr. caught it out of bounds.

Will Bettridge connected on all four of his field goal attempts for the Cavaliers, including two in OT.

The Hurricanes defense recorded five sacks, with the last one coming at a crucial time.

On third-and-4 from Miami’s 19, defensive end Leonard Taylor recorded the Hurricanes’ fifth sack of the game to force a 41-yard try by Bettridge, which he made to tie the game at 12.

Miami forced the overtime by engineering a 13-play, 53-yard drive, which culminated with a 20-yard field goal by Borregales as time expired in regulation.

Henry Parrish Jr. led the Hurricanes with 113 yards on 24 carries.