Ahead of the Miami Dolphins Week 2 matchup versus the Ravens in Baltimore, starting quarterback Tua Tagovailoa made a stunning revelation about how his physical limitations cause some notable visibility issues on the field.

The Dolphins took the former Alabama University star with the fifth pick overall in the 2020 NFL Draft with big hopes he could become the team’s next franchise QB. After two seasons in the NFL, Tagovailoa hasn’t shown signs of reaching the potential the organization and many talent evaluators saw in him two years ago. That is why 2022 is a make-or-break season for the 24-year-old signal-caller.

In Week 1, Tagovailoa showed the upside in his capabilities by leading the team to a dominant 20-7 win over division rivals the New England Patriots. The QB threw for 270 yards and one touchdown on the day while being highly efficient as he connected on 70% of his passes, and showed some nice chemistry with expensive offseason acquisition Tyreek Hill. It is just one game, but there is hope Tagovailoa can take a development leap forward this season.

However, on Thursday he admitted there are some natural limitations on his skills that will always be there and always put a cap on the heights he can reach. However, it isn’t his throwing arm like many might assume, instead, he claims his height has proven troublesome at times for him in the NFL. 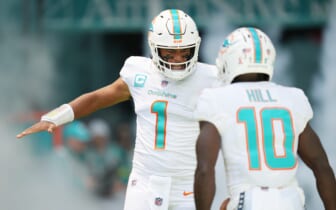 Tagovailoa is listed as being 6-foot-1. That is a good bit shorter than Miami left tackle Terron Armstead (6-foot-4), left guard Liam Eichenberg (6-foot-5), center Connor Williams (6-foot-5), right guard Robert Hunt (6-foot-6), and right tackle Greg Little (6-foot-5). In comparison, fellow QB Josh Allen is 6-foot-5, Justin Herbert is 6-foot-6 and Patrick Mahomes is 6-foot-3. Proof that Tagovailoa’s height is definitely problematic at this level of the sport, and is a limitation that can’t be fixed.