Long, who turns 23 later this month, reportedly got shoved out of bounds after a sideline catch during 11-on-11 drills. Trainers inspected his left knee and he looked unable to put any weight on the leg while they helped him to the cart.

Miami selected Long in the third round of the 2021 NFL Draft out of Boston College, where he caught 57 passes for 685 yards and five touchdowns in 11 games in 2020. 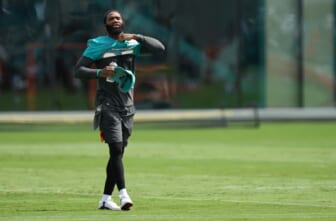 The Dolphins were already thin at the position with returning starter Mike Gesicki landing on the COVID-19 reserve list earlier this month.

Long caught 89 passes for 1,297 yards and nine TDs in three seasons at Boston College. He ranked fifth in the ACC with an average of 18.2 yards per catch in 2019.