Miami Dolphins’ Sony Michel to don No. 34 as sign of respect to Ricky Williams 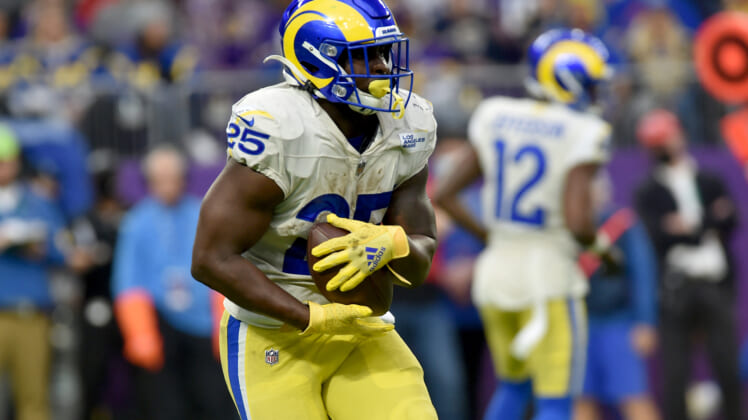 Nowadays, NFL stars can be found on nearly every team at the wide receiver position, but there was a time when every kid growing up wanted to be like their favorite running back. For new Miami Dolphins tailback Sony Michel, that childhood idol was none other than former ‘Phins great Ricky Williams.

Ricky Williams’ footprint was larger than life in Florida

After being born in Orlando, Florida in 1995, Sony Michel may not have been around to remember when Ricky Williams was running through defenses with the Texas Longhorns, where he won a Heisman Trophy in 1998.

Williams’ profile coming out of college was so large that coach Mike Ditka traded his entire 1999 New Orleans Saints draft class, in addition to two of his top three picks in 2000, for the chance to move up and select Williams. He spent just three years with the Saints before being traded to the Dolphins for two first-round picks and change. Both of these trades would be unheard of today, but it shows how much Williams was valued around the league in his heyday.

While Michel may not have been around for his initial rise to stardom, he was old enough to remember Williams becoming a superstar later with the Dolphins.

After back-to-back 1,000-yard seasons with the New Orleans Saints, Williams landed in Miami, where he immediately experienced the best year of his professional career.

Despite his fame, his first year with the Dolphins was the only Pro Bowl or All-Pro team he made in his 11-year playing career.

He then abruptly retired in 2004 after testing positive for marijuana, in which he was set to face a four-game suspension in addition to a $650,000 fine. This fine equaled a much larger percentage of his salary back then than what star players deal with in the modern era.

But Williams’ passion for football was too strong to walk away forever. Williams then spent some time in the Canadien Football League after yet another suspension, this time for a full year from the NFL.

Still, Williams left an impression on millions of football fans, all while rocking No. 34 playing for the Saints, Dolphins, and Baltimore Ravens.

Related: Sony Michel signs with the Miami Dolphins, giving the team another weapon

One of those early Ricky Williams fans, is Sony Michel.

Despite being just seven years old when Williams had his best season in the NFL, he clearly left an impact on the young impressionable mind of Michel.

“Everybody knows, man, this is a great number. Ricky Williams ran the ball hard here. I’m sure he did a lot of numbers (statistics), you know what I’m saying? So I can’t just be rocking it just to rock it. I’ve got to come out here and put in some work.”

Sony Michel on wanting to pay respects to Ricky Williams with No. 34

It’s worth noting, that the 1,853 rushing yards Williams gained in 2002 is still a Dolphins’ team record.

In his first season with the team, Michel is expected to compete for a starting role along with Raheem Mostert, Chase Edmonds, and Miles Gaskin.

He has previously worn numbers 25 and 26 with the New England Patriots and Los Angeles Rams, but now fans will get their chance to purchase a No. 34 with Michel on the back. Or they could always bust out their Miami Dolphins Ricky Williams jerseys. Whatever works.

Although Michel may not get that chance under coach Mike McDaniel to receive 430 touches as Williams did, he clearly wants to leave a big impression on the next generation of Dolphins fans.