Dealing with broken ribs suffered during his Week 3 game against the Buffalo Bills, young Miami Dolphins starting quarterback Tua Tagovailoa was placed on injured reserve per Ian Rapoport. This designation means Tagovailoa will miss at least the next three games.

Being on the IR ahead of Week 3 means Tagovailoa’s first chance to get back on the field will be in Week 6, coming against the Jacksonville Jaguars in London.

While the hit Tagovailoa suffered looked rough, placing him on IR just a day before Sunday’s game indicates the ribs maybe are not healing as quickly as they hoped. Or maybe the Dolphins are simply using this procedure for an extra roster spot ahead of gameday.

Whatever the reason, Tagovailoa will be forced to miss three games as he rehabs his broken ribs. 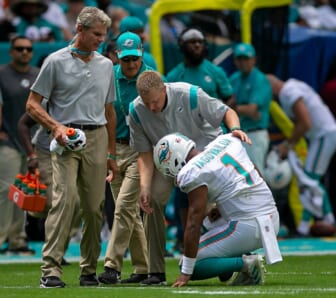 Expected to start the next three games, veteran journeyman Jacoby Brissett will get yet another chance to show what he can do. Signed this past offseason to backup Tagovailoa, Brissett is in line to make the 33rd start of his six-year career.