The Miami Dolphins drafted Jaylen Waddle with the hope that he would bring explosiveness to the offense in his rookie season. With Week 1 approaching, Waddle may be destined for an even bigger role than Miami imagined.

Waddle, the 6th pick in the 2021 NFL Draft, got off to a slow start this summer. He dealt with a limp at training camp, causing him to move slower in drills and limiting his game-changing athleticism. He later experienced an injury scare in the preseason but came out of it with a clean bill of health.

With Miami’s offense in desperate need of a playmaker and Tua Tagovailoa looking for someone to become his No. 1 receiver, it seems Waddle might be that guy.

ESPN’s Marcel Louis-Jacques wrote that Waddle has made a strong impression this summer and he is expected to be an “instant impact player” right out of the gate this season. With his fellow receivers dealing with injuries, Waddle has become Tagovailoa’s go-to weapon in joint practices.

Both players have some familiarity with one another dating back to their years at Alabama. However, Waddle stated before the draft that he preferred Mac Jones at quarterback because the two had better on-field chemistry because they worked together more in practice. 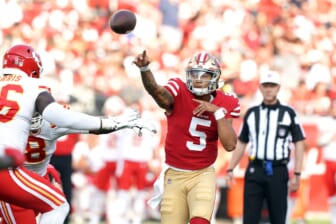 Miami’s rookie wide receiver needed some time to develop that same cohesion with Tagovailoa. With DeVante Parker, Preston Williams and Will Fuller limited in practice, that opened the door for Waddle to spend a lot of time with his new quarterback.

If Waddle stays healthy, he’ll create plenty of highlights as a rookie. He averaged 21.1 yards per catch last season at Alabama, finishing with 591 receiving yards in just six games. It’s evident that skill is translating to the next level and it might be the biggest reason why Tagovailoa could make a leap in 2021.