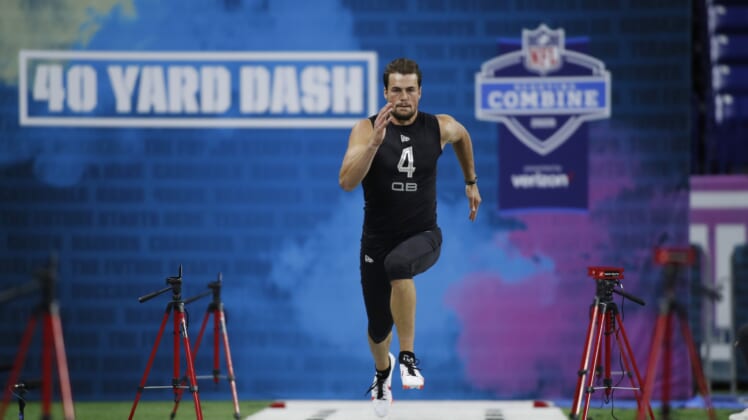 The Miami Dolphins were connected to Tua Tagovailoa for months leading up to the 2020 NFL Draft. Recently, reports have indicated that Justin Herbert might now be their target with the No. 5 overall pick. Now with the NFL Draft drawing closer, the Dolphins could potentially draft an even more surprising player to be their quarterback of the future.

According to The Miami Herald’s Barry Jackson, the Dolphins have done extensive work on the 2020 quarterback class even beyond Tagovailoa, Herbert and Joe Burrow. Among them, Miami has closely evaluated former Washington quarterback Jacob Eason and the team is scheduling a video conference with him in the near future.

If Miami’s top three quarterbacks are gone when they’re on the clock with the fifth selection, the front office is prepared to draft a top player at another position and take a quarterback later.

Thanks to a collection of draft picks that includes three first-round selections and two second-round picks, the Dolphins could easily grab a quarterback a little later in the draft.

The Dolphins also scheduled an in-person visit meeting with former Utah State star Jordan Love before the NFL canceled team visits due to COVID-19. Love is one of the biggest risers during the pre-draft process and is now expected to be a top-25 pick.

Eason and Love are both greater risk-reward prospects than the top quarterbacks in this class. Both players possess great arm strength and the prototypical tools to potentially become a great passer. However, they also are very underdeveloped and must learn to become more consistent, make better decisions and learn how to diagnose defenses.

It remains likely that Tagovailoa or Herbert will be available to the Dolphins when they are put on the clock with the No. 5 selection. If some big moves happen, though, it’s wise for this front office to have the second-tier quarterbacks evaluated with a plan in place to still land the future face of their franchise.