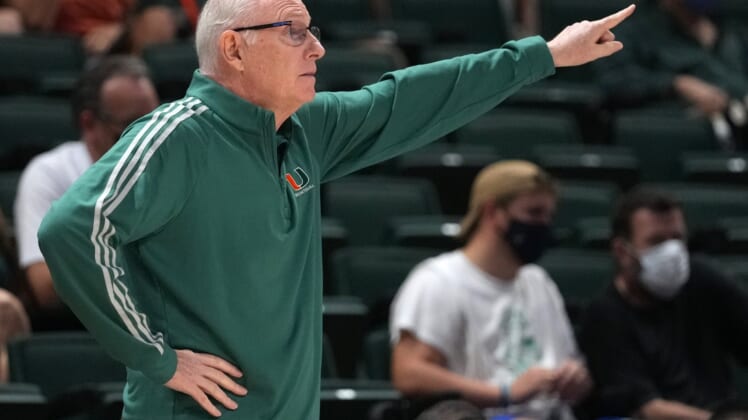 The Miami Hurricanes have scored more than 90 points in two straight league games, something no other ACC team has accomplished since 2017.

Further, no Hurricanes team has ever accomplished that specific feat.

Miami (11-3, 3-0) has won seven straight games overall and is one of four teams unbeaten in ACC play, joined by bluebloods Duke, North Carolina and Louisville.

That’s all good news for the Hurricanes, who on Wednesday night will host the Syracuse Orange (7-6, 1-1).

The bad news for Miami is Syracuse’s vaunted 2-3 zone. Since joining the ACC, Miami is just 4-6 against Syracuse, and the Hurricanes have not eclipsed 70 points against the Orange in any of those 10 games.

“Syracuse is bigger than us at every position,” Miami coach Jim Larranaga said. “That’s what makes their zone so challenging.”

Syracuse coach Jim Boeheim, though, was not happy with his team after Saturday’s 74-69 loss to visiting Virginia. In fact, Boeheim was extremely critical of his players, including point guard Joseph Girard III, who was held to three points.

“Joe played great for first 11 games, but he hasn’t been there the past two games,” Boeheim said.

Boeheim also blamed his defense for missing rotations, and he criticized Cole Swider for shooting 3 for 12.

The players Boeheim ripped have a tough assignment on Wednesday, as they’ll be tasked with containing Miami’s Kameron McGusty, who ranks fifth in the ACC in scoring at 18.3 points per-game and is the league’s reigning Player of the Week. Miami’s Isaiah Wong is among the league’s top scorers too, averaging 16.5 points per-game.

“Jordan is getting more comfortable,” Larranaga said of Miller, a George Mason transfer who is new to Miami this season.

Larranaga — who is hoping that starting center Sam Waardenburg returns on Wednesday after missing two straight games due to COVID protocols — credits Moore for a lot of Miami’s efficiency on offense.

“Charlie is a very willing passer,” Larranaga said of Miller, who had seven assists in Miami’s win over Wake Forest on Saturday. “His style of play is contagious.”

But Coach Boeheim said Buddy is constantly drawing double-teams, meaning that the rest of his players need to take advantage.