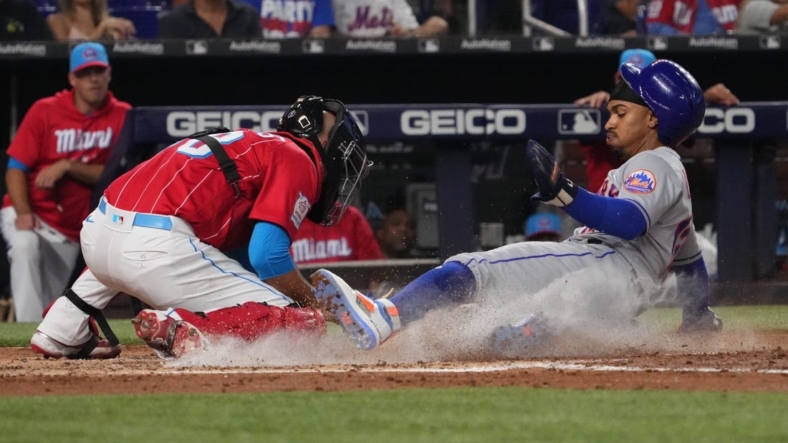 The Mets (88-52) belted 16 hits, including solo homers by Francisco Lindor and Eduardo Escobar.

Lindor went 3-for-5 with three runs and two RBIs. He has 19 RBIs in 16 games against the Marlins this season.

Escobar went 3-for-5 with two RBIs and two runs. Escobar and Lindor both fell a triple short of the cycle.

Carlos Carrasco (14-6) took over New York’s lead in victories this season as he held Miami to four hits, no walks and one run in six innings. He struck out six batters and lowered his ERA to 3.80.

The Marlins (57-81) lost right fielder Avisail Garcia, who left the game in the first inning due to discomfort in his left hamstring.

Miami opened the scoring in the first as Joey Wendle hit a two-out single and Garrett Cooper stroked an RBI double a few feet inside the left-field line.

New York tied the score in the third on a one-out double by Lindor and Jeff McNeil’s RBI single. Lindor would’ve been out at the plate, but right fielder Brian Anderson’s strong one-hop throw skipped past catcher Jacob Stallings.

The Mets broke the game open in the fourth, getting RBI hits from Escobar (double), James McCann (single) and Lindor (single). McNeil added a sacrifice fly to make it 5-1.

With two outs in the inning, Tyler Naquin battled back from a 0-2 count, drawing a walk to load the bases.

Marlins manager Don Mattingly removed Lopez in favor of Andrew Nardi, who got ahead of Canha 0-2. However, Canha fouled two pitches and took a ball before blasting his grand slam off a 95-mph fastball.

The Marlins added Lindor’s homer in the fifth and Escobar’s blast in the seventh, taking an 11-1 lead, and the game was virtually over at that point.