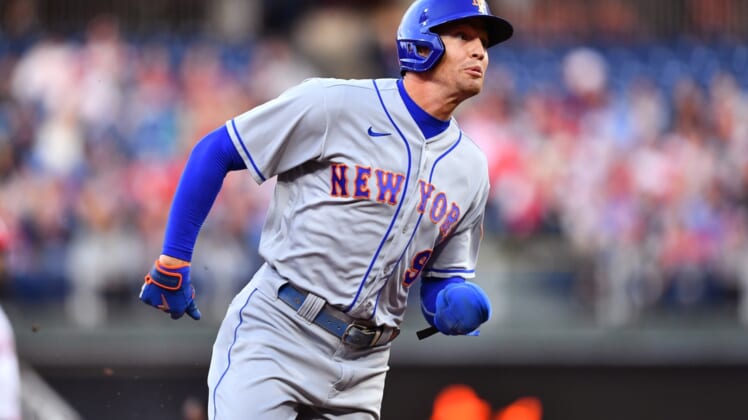 Tylor Megill continued his strong start to the season Tuesday night, when the New York Mets right-hander earned the win with 5 1/3 innings of three-hit ball and combined with three relievers on a 2-0 shutout of the host Philadelphia Phillies.

Megill (2-0), who was ticketed for the minor leagues before Jacob deGrom suffered a shoulder injury that forced Megill into making an Opening Day start last Thursday, has thrown 10 1/3 scoreless innings this season with no walks and 11 strikeouts, including five Tuesday night.

Megill is just the third Mets Opening Day pitcher to toss scoreless ball in his first two starts, following in the footsteps of Hall of Famer Tom Seaver (Apr. 15-21, 1972) and deGrom (Mar. 28-Apr. 3, 2019). No New York Opening Day pitcher has ever opened the season with three straight scoreless starts.

Chasen Shreve stranded his inherited runner, Johan Camargo, in the sixth and recorded one out in the seventh before giving way to Drew Smith, who tossed 1 2/3 innings.

In the ninth, Edwin Diaz allowed a one-out infield hit to J.T. Realmuto, who beat the throw to second on Nick Castellanos’ grounder to short in the ninth. But Diaz struck out Rhys Hoskins, the potential game-winning run, to earn his first save.

Megill and former Mets right-hander Zack Wheeler (0-1) were locked in a scoreless duel before Brandon Nimmo homered off his ex-teammate with two outs in the fifth. That chased Wheeler, who allowed two hits and one walk while striking out three in his season debut.

The Mets built an insurance run in the eighth, when Nimmo drew a leadoff walk and was forced at second on a grounder by Starling Marte before Marte – the reigning major league stolen base champion – swiped second and scored on Francisco Lindor’s single.

Pete Alonso had the Mets’ other hit, a fourth-inning single.

Realmuto had two hits for the Phillies.