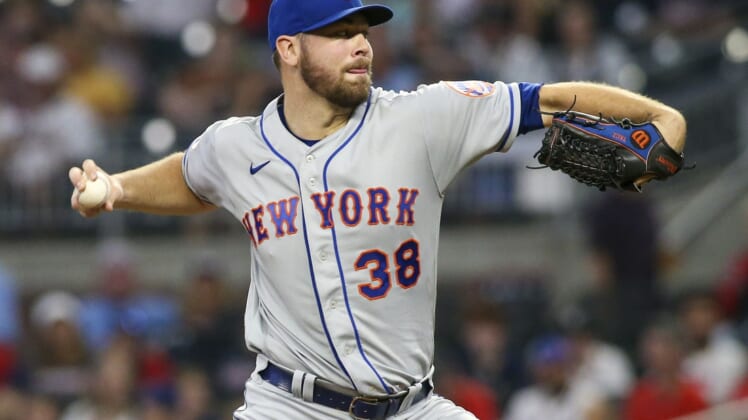 Tylor Megill already has pitched like an ace for the New York Mets this season.

On Sunday, he’ll get a chance to act as a stopper when he takes the mound as the Mets — seeking to avoid their first series loss of the season — visit the Arizona Diamondbacks in the finale of a three-game set in Phoenix.

The Diamondbacks never trailed Saturday night, when Humberto Castellanos earned the win after allowing two runs over five innings and five players had an RBI apiece in a 5-2 victory.

The two runs scored Saturday tied a season low for the Mets, who lead the majors with 11 wins and have scored 75 runs.

“I knew we were going to have to score runs tonight,” Mets manager Buck Showalter said after spot starter Trevor Williams — making his first appearance since April 17 and his first start since last September — gave up four runs in two-plus innings. “That’s the story of the game for me.”

The story of the early season for the Mets has been Megill, who went 4-6 with a 4.52 ERA in 18 starts as a rookie last season and was expected to start 2022 in the minors. He was thrust into the role of Opening Day starter with Jacob deGrom (stress reaction in his right scapula) on the injured list and Max Scherzer pushed back due to a mild hamstring injury.

Megill tossed a combined 10 1/3 scoreless innings in his first two starts but might have been at his most impressive last Tuesday, when he gave up four runs over six innings and didn’t factor into the decision as the Mets edged the San Francisco Giants 5-4 in 10 innings in the first game of a doubleheader. The 26-year-old gave up two runs apiece in the second and third innings but held the Giants at bay the rest of the way as he threw six innings.

“I think that’s the type of things you look for in a young pitcher, as much as a couple good starts,” Showalter said after the game. “I could tell (the Giants) were in full ambush mode early and (Megill) made the adjustments.”

Bumgarner, with 303 more big-league starts than Megill, is in the midst of a major adjustment to his repertoire. The 32-year-old former World Series MVP, who has a 4.84 ERA in 38 starts since joining the Diamondbacks as a free agent in December 2019, has thrown the cutter — which he describes as half cutter, half slider — 53 percent of the time this season after throwing it 34.3 percent of the time last year.

Bumgarner’s command has been off — he has 10 walks and nine strikeouts in 13 innings — but he’s allowed only two earned runs over three starts. He gave up a pair of unearned runs over five innings and took the loss last Tuesday when the Diamondbacks fell to the Washington Nationals 6-1 in the first game of a doubleheader.

“I do whatever I can to get outs,” Bumgarner told reporters Tuesday night. “I don’t care if I throw whatever percentage of what. I’m just here to get outs. That’s all I care about.”

Megill has never opposed the Diamondbacks. Bumgarner is 6-0 with a 2.49 ERA in 10 regular-season starts against the Mets. He also shut out New York in the 2016 National League wild-card game, when Bumgarner tossed a four-hitter to lead the San Francisco Giants to a 3-0 victory.