Mets turn to Jacob deGrom in search of split with Braves 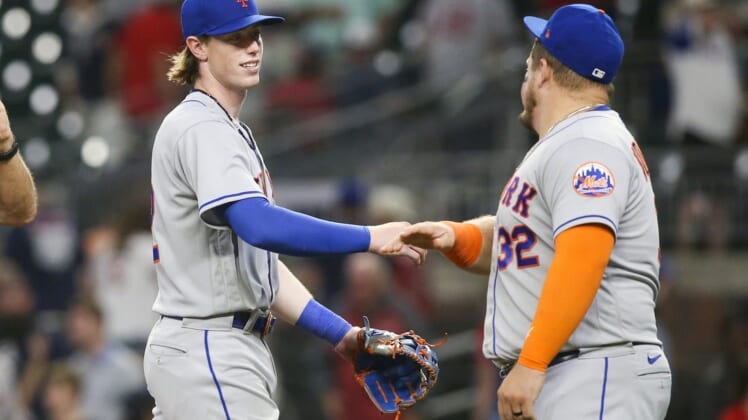 Atlanta’s Max Fried would like to forget his most recent start against the Mets, but New York’s Jacob deGrom has nothing but good memories from his last outing against the Braves.

The two standouts will oppose each other on Thursday night in the finale of a four-game series in Atlanta.

New York ended Atlanta’s eight-game winning streak on Wednesday and is looking for a series split and a chance to leave town with the same 5 1/2-game advantage in the National League East that it brought into the series.

DeGrom (2-0, 1.62 ERA) took a perfect game into the sixth inning when he faced the Braves on Aug. 7 in New York before allowing a walk and a two-run homer. He finished with 12 strikeouts over 5 2/3 innings, allowing one hit and two runs.

Fried (10-4, 2.60) has not pitched since the second game of the doubleheader against the Mets on Aug. 6. He threw six innings and allowed four runs (two earned) on six hits and one walk, with five strikeouts. He suffered a concussion in the third inning after falling and hitting his head on the ground. He was placed on the seven-day concussion injured list.

DeGrom has been a handful for opponents since he returned from a year’s worth of injuries.

He has allowed only six hits in his first three starts and has yielded no more than three hits in any single outing. In August, deGrom leads the majors with 28 strikeouts, a .109 opponents’ batting average, a 28.1 strikeouts-to-walk ratio and 3.24 hits per nine innings.

“You don’t really know what to expect coming back, but last time out I was able to look at a couple of things where I felt I was getting off mechanically and try to make those adjustments while I was going through a pretty slow process of coming back,” deGrom said. “That seems to have paid off a little bit.”

In his most recent start on Saturday, he threw six shutout innings in a 1-0 win over Philadelphia. He gave up two hits and struck out 10 while throwing 76 pitches for the second straight start.

Atlanta manager Brian Snitker, who was ejected for the first time this season on Wednesday, used five relievers in the Braves’ 9-7 loss on Wednesday. But he did not employ closer Kenley Jansen, Raisel Iglesias or A.J. Minter, the team’s three primary late-inning arms.

“We’re not going to do that,” Snitker said. “We’ve got too many games to play. We’re going to have leads, and (Kenley) is going to be unavailable to pitch, so we’ve just got to have other guys step up and do that. That’s why you have so many guys down there, so you don’t go chase something when we’re down.”

A bright spot for the Mets was the debut of third baseman Brett Baty, who became the fifth player in franchise history to homer in his first at-bat.

“I’m amazed by how calm he stayed,” New York shortstop Francisco Lindor said. “He’s poised out there, handling himself like a professional. I can’t wait to watch him grow for many more years.”