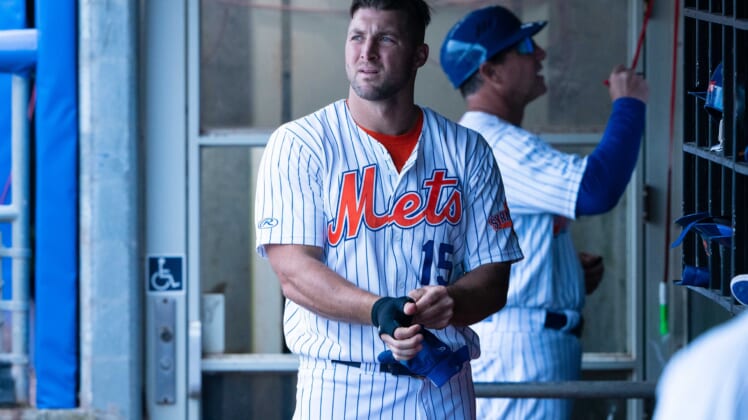 When the New York Mets promoted outfielder to Triple-A Syracuse before the 2019 season, many got excited that the 31-year-old would be on the doorstep of an MLB debut after making great strides in 2018.

Instead, Tebow has become the worst hitter across the entire minor leagues. At a time when hitters across Triple-A are posting incredible numbers thanks to the level bringing in MLB baseballs, the media and fan sensation finds himself near the bottom of nearly every statistic.

Through 53 games this season, Tebow has shown zero signs of progress or ability to handle Triple-A pitching. He posted a .149/.219/.194 slash line in April and just barely improved upon that in May with a .162/.269/.250 slash line and his only home run of the season on May 19. Even when he faced a position player on the mound, Tebow turned in an embarrassing at-bat.

The player who showed flashes of improvement in 2018 is gone and the huge following seems to be disappearing as well. NBT Bank Stadium, which has a seating capacity of 11,071, is one of the emptiest parks at the Triple-A level.

According to MILB.com’s attendance records, Syracuse averages 4,500 fans per game this season. Out of 30 total teams in the International League and Pacific Coast League, Syracuse ranks 24th in average attendance this season.

The Tebow experience simply isn’t working anymore for the Mets and it’s long past time for the organization to admit it.

Fans have no reason to pay any money to see a 31-year-old play poorly in the outfield then walk into the batter’s box and post the fourth-worst OPS (.432) and lowest wRC+ (12) across all of MILB, according to FanGraphs.

Better players deserve the opportunity to play at the Triple-A level and receive the pay increase, because it’s a spot the worst player in the minors hasn’t earned.