Mets take two of three from Dodgers in NL showdown 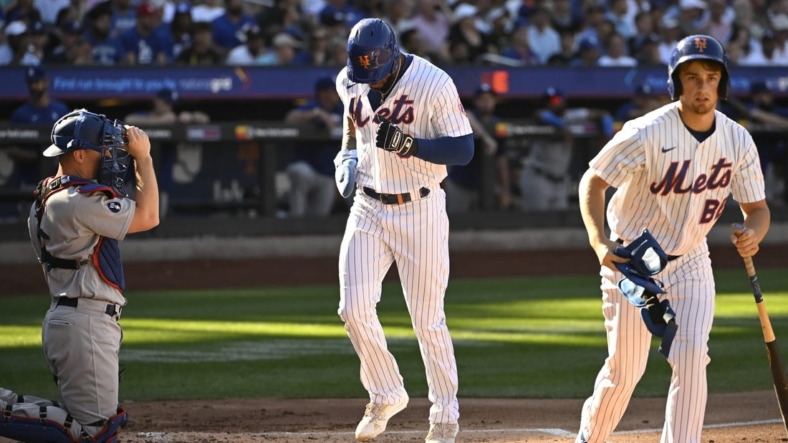 Darin Ruf lofted the tiebreaking sacrifice fly in the sixth inning for the host New York Mets, who beat the Los Angeles Dodgers 5-3 Thursday afternoon in the rubber game of a three-game series between the top two teams in the National League.

The Mets, who scored twice apiece in the sixth and seventh, won the season series four games to three. New York entered Thursday with a three-game lead over the Atlanta Braves in the NL East.

The Dodgers, who still lead the San Diego Padres by 18 games in the NL West, lost back-to-back games for the first time since they fell to the Washington Nationals July 25-26.

Clayton Kershaw, who was activated off the injured list prior to the game after missing the last four weeks with lower back pain, limited the Mets to one run — via Mark Canha’s bases-loaded walk in the first — and one hit over five innings.

Kershaw, who walked three and struck out six, retired the last 13 batters he faced before New York rallied from a 2-1 deficit in the sixth against Chris Martin (4-1).

Starling Marte legged out an infield single and scored four pitches later on a double by Francisco Lindor. After Martin struck out Pete Alonso, Lindor stole third base with the right-handed hitting Ruf at the plate. Lindor then trotted home on Ruf’s fly out to the wall in left field.

The Mets added a pair of two-out runs in the seventh. James McCann doubled and scored when Brandon Nimmo’s pop-up fell in between second baseman Gavin Lux and right fielder Mookie Betts. Nimmo, who was credited with a double, scored on Marte’s single.

Chris Bassitt (12-7) earned the win after allowing two runs on six hits — including Chris Taylor’s two-run single in the first — and three walks while striking out four over six innings. Trevor May worked a hitless seventh before Edwin Diaz navigated the top of the eighth against the middle of the Dodgers’ order.

Diaz, usually the Mets’ closer, walked leadoff batter Freddie Freeman and plunked Will Smith before surrendering warning track flyouts by Max Muncy and Justin Turner, the latter of which scored Freeman. Diaz then struck out Lux on a 103-mph fastball before Adam Ottavino earned his third save with a perfect ninth.