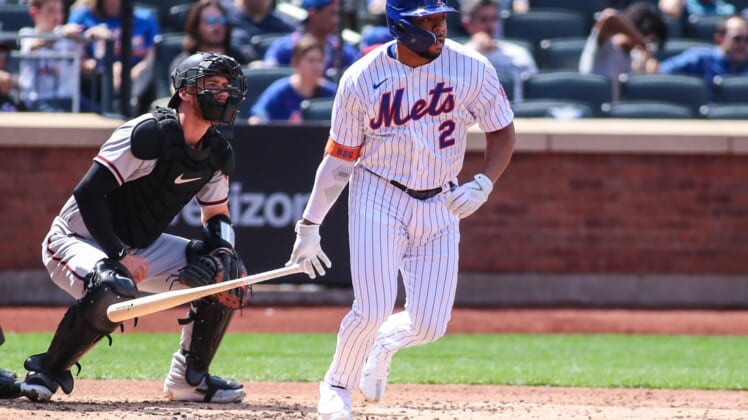 New York Mets manager Buck Showalter said sometimes it benefits a team to catch a good opponent early after the Mets won the series against the San Francisco Giants on Thursday.

It may not be too early to declare the Mets are pretty good themselves.

The Mets will look to continue building momentum Friday night when they begin a six-game trip by visiting the Arizona Diamondbacks in the opener of a three-game series in Phoenix.

Left-hander David Peterson (0-0, 0.00 ERA) is slated to oppose right-hander Zac Gallen (0-0, 0.00) in a battle of pitchers who started a game in last weekend’s series at Citi Field, where the Mets won two of three games against the Diamondbacks.

Carlos Carrasco tossed 7 2/3 strong innings Thursday as the host Mets clinched a win of the four-game series against the Giants, 6-2. The Diamondbacks completed a seven-game East Coast road trip Thursday by edging the Washington Nationals 4-3 to salvage a split of a four-game set.

The win over the Giants — whose 107 victories in 2021 were tied for the 13th-most in major-league history — locked up a fourth straight series win to start the season for the Mets.

New York leads the majors with 10 victories and has the second-best run differential (plus-30) and lowest starting pitching ERA (2.10) in the game, the latter despite the absence of Jacob deGrom, who is out until at least late May with a stress reaction in his right scapula.

The Mets also rank second in the majors with 67 runs, just one behind the Cleveland Guardians, and have fared well in clutch situations. New York scored nine of its 16 runs against the Giants with two outs.

“Given where a team like (the Giants) are going to be, sometimes, if you’re going to get somebody that’s really good, you better get them early, before they kind of fall in line with who they are and what they’re going to be,” Showalter said. “I don’t think our guys feel any different about whether they can compete for what we’re trying to do because we won three of four from the team that won the most games in baseball last year. Can’t hurt.”

The rebuilding Diamondbacks crafted their first winning streak of the season thanks to an old friend Thursday, when Matt Davidson made a memorable return to his original organization by homering in the first inning.

“It feels great to be back,” Davidson said. “I’m excited to be here. I’m just ready to play and give it a second chance.”

Peterson allowed three hits over 4 1/3 innings in the Mets’ 5-0 win over the Diamondbacks on Sunday. Gallen gave up two hits over four innings in his season debut Saturday, when Arizona earned a 3-2 victory.